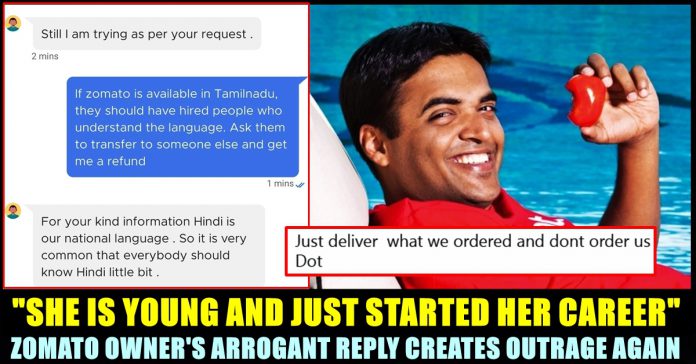 Zomato founder Deepinder Goyal’s take on the recent controversy that took place after a customer named Vikash got offended by the messages he received from a call centre agent of the food delivery app, has sparked outrage one more time against his company in the same day. Deepinder, through his series of tweets, talked about the tolerance level and chill of the people in country India and also reinstated the agent whom the company announced that she got terminated.

“Having said that, we should all tolerate each other’s imperfections. And appreciate each other’s language and regional sentiments. Tamil Nadu – we love you. Just as much as we love the rest of the country. Not more, not less. We are all the same, as much as we are different.” he added in his tweet which is going viral.

Check out his series of tweets below :

This tweet from Deepinder created huge outrage among the Tamil nadu based twitter users who started confronting the Zomato founder. “It is not about regional sentiments. It’s about not imposing the language and not judging or lecturing people. Btw don’t give lecture on tolerance to us.” a twitter user replied with many others reacting in a similar way. Thiruvaiyaru MLA Durari Chandrasekhar reacted to Deepinder by questioning him how difficult it is to take responsibility on what happened.

Before we bring in legislation to reserve jobs for locals in TN, we need to enforce local hires for front desk/ customer care on priority before others start lecturing us on tolerance, patriotism, culture etc.

How difficult it is to take responsibility, apologize and move on? https://t.co/dQAMwArRPr

Instead of owning the mistake of
Non-planning of local language service
by the corporate company,

The corporate is trying to preach 'Tolerance'
to Tamil People, who LOST 500+ LIVES
in the Anti-Hindi Agitation of Tamil Nadu! https://t.co/5kwZ1k8EEo pic.twitter.com/RhM7iCHDCt

Mr.Goyal On 8.72019,pune court slapped Rs. 55,000 for ur company for delivering NovVeg food instead of vegetarian food to person who was on fasting

So would u call the person who filed an case against u as a intolerance person?

jus do it and u will get know tamils tolerance. https://t.co/3Yhe3oFZlk

Whatever new or old agent.. more than a regional sentiment it was an arrogant response. It will not be tolerated. Zomato has a history of being rude and arrogant in responding to their customers and the same has been reiterated with this incident.

Just deliver what we ordered and dont order us
Dot https://t.co/AJYSFezeQO pic.twitter.com/41QsX62p8r

Whatever new or old agent.. more than a regional sentiment it was an arrogant response. It will not be tolerated. Zomato has a history of being rude and arrogant in responding to their customers and the same has been reiterated with this incident.

Then Mr Goyal hire people who know state languages. You statement make it’s clear- your hiring process is flawed.
Customers do not need an language expert they need someone who understands basic communication in their own language.

Being the founder of a company you better be knowing the sentiments of regional language and culture!!

Tsk tsk, probably wasn't the smartest PR move to adopt this sanctimonious tone when he had this on his TL. https://t.co/cKOaIkyqb0 pic.twitter.com/BdLZ0YI0w8

Mr. Goyal Ur own employees filed an case against ur company in Supreme court for basic needs like toilet and salary.

First show some tolerance and mercy to ur own employees and then come and teach us.

Definitely u should be blamed for this. Am I right? https://t.co/3Yhe3oFZlk

This ignorant tweet just made #RejectZomato a whole lot bigger. Also no one asked for the employee to be sacked. Your company did based on its so called diversity policies. Ppl just asked for an apology and a change in the mindset but hey you had to tweet and make it a lot worse https://t.co/V5MTkB9unQ

How is this an ignorant mistake? What gave your support centre person the right to speak like that to a customer? Being factually wrong is one thing, but tutoring someone at the time of need? Age isn’t the matter here,nor the ignorance but this arrogance is, hers and yours! https://t.co/FovKBrthBE