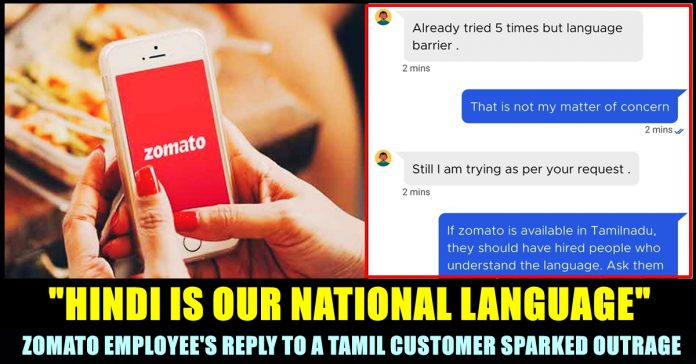 A series of screen shots shared by a twitter user, complaining against one of the customer care personalities about how he insisted on Tamils and other non-Hindi speakers to learn a “little” bit of Hindi while replying to a complaint, sparked outrage among the users of Tamil social media users. Producer C.V Kumar of “Pizza”, “Soodhu Kavvum” fame and many others expressed their condemnations over the reply made by the Zomato employee.

A twitter user named Vikash shared the series of screen shots which shows himself chatting with the Zomato customer care employee. The former who didn’t get what he ordered from the Zomato online food delivery platform, tried to get refund from the app. In return, what all he received is a schooling from a Zomato employee on why everyone in India should learn a little bit of “Hindi”.

When Vikash ordered for Chicken rice combo which consisted a bowl of chicken rice and pepper chicken, he only received the rice. He contacted Zomato and asked the chat executive to get his refund but the person in the other end cited language barrier as the reason for not being able to get his refund. Replying to the response, Vikash suggested the employee to transfer his issue to someone else who knows Tamil and sort his problem out.

“For your kind information Hindi is our national language. So it is very common that everybody should know Hindi little bit” read the message sent by the Zomato customer care support. Check out the series of screen shots that are doing rounds in online platforms below :

Sharing the screen shots, Vikash wrote “Ordered food in zomato and an item was missed. Customer care says amount can’t be refunded as I didn’t know Hindi. Also takes lesson that being an Indian I should know Hindi. Tagged me a liar as he didn’t know Tamil. @zomato not the way you talk to a customer. @zomatocare” in his tweet.

Ordered food in zomato and an item was missed. Customer care says amount can't be refunded as I didn't know Hindi. Also takes lesson that being an Indian I should know Hindi. Tagged me a liar as he didn't know Tamil. @zomato not the way you talk to a customer. @zomatocare pic.twitter.com/gJ04DNKM7w

“Hi Vikash, this is unacceptable. We’d like to get this checked ASAP, could you please share your registered contact number via a private message?” Zomato’s reply to Vikash’s tweet read and he replied back writing “I need a strong clarification and public apology from the concerned person who accused me a liar and asked me to learn Hindi without any base reasons”

The tweet caused huge outrage among the Tamil nadu based online users. As a result hashtag “Reject Zomato” is trending in the micro blogging social media site. Check out some of the reactions below :

This is so stupid . How come a @zomato @zomatocare answer like this . This shouldn’t take it easy . Then every corporate follow that . If no @zomatocare in tamil then we will #boycotzomato https://t.co/n4pcRVuzrD

Apparently, @zomato which operates in Tamil Nadu won't have any customer support in Tamil. They want the Tamils to learn Hindi to speak to them.

This sense of entitlement of Hindi speaking people is what Tamil Nadu has been opposing all along @zomatocare https://t.co/x79TRBefIS

Understand that India doesn't have any National Language. Uninstalling Your App since your customer care forced to speak Hindi. @zomato @zomatocare#uninstall_zomoto_app pic.twitter.com/Fohv9nUCre

Along with fans, many celebrities from Tamil film industry have been tweeting after watching the recently released Pa. Ranjith's directorial "Sarpetta Parambarai". Maari Selvaraj...