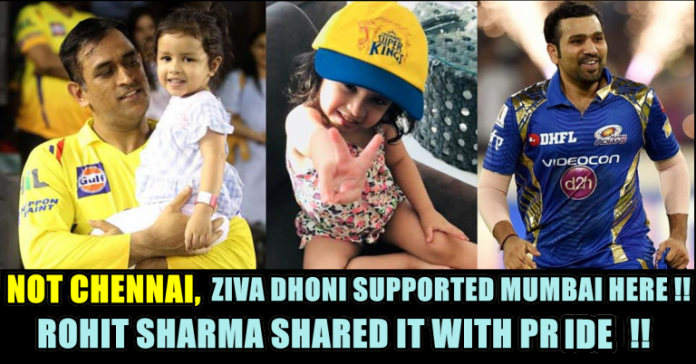 Mumbai Indians is one of the most famous teams in the Indian Premier League. The team has had a great fan-following ever since the inception of IPL. Also, some stalwarts like Sachin Tendulkar, Sanath Jayasuriya, and many others represented the franchise over the years. But, it was Rohit Sharma who changed the face of their cricket after taking over the reins back in 2013. Under Rohit, the team has evolved into one of the most successful ones and also won three titles. The Chennai Super Kings have levelled this feat in the IPL this year. Mumbai Indians and Chennai Super Kings are considered to be arch-rivals and both have been involved in some great battles. Moreover, both have a great fan-base and the supporters of these teams connect themselves quite emotionally to their respective franchises.

However, the 31-year-old managed to get one of the die-hard fans of Chennai Super Kings on his side. MS Dhoni is undoubtedly one of the biggest icons of the Chennai Super Kings. He found some great success with the franchise and the side won all their three titles under him. Furthermore, they have qualified to the playoffs every single time thus far. Hence, it is quite obvious that his daughter Ziva Dhoni would also support his team. In fact, Ziva attended all the matches of Chennai Super Kings in 2018 and also was seen enjoying when the side won the title. Moreover, she was spotted cheering for the team and her father on several occasions. Meanwhile, Rohit Sharma managed to make Ziva Dhoni a Mumbai Indians’ supporter while they were in England. Rohit shared a video on Twitter of Ziva Dhoni cheering her team on the micro-blogging site Twitter. He also tagged MS Dhoni and Sakshi Dhoni in the tweet. The members around were seen enjoying this moment quite a lot. ‘We have a new @mipaltan fan in the house yo!! @msdhoni @SaakshiSRawat,’ Sharma tweeted.

What do you think on thus tweet of Rohit Sharma ??

Previous article“Don’t Go To India, Its Not Safe” Said Swiss Girl Player’s Parents & Restricted Her From Squash Championship !! This Hurts !!
Next articleFor Not Trolling “DMK”, ADMK Supporter Asked Which Post C.S Amuthan Belongs In DMK !! The Director Revealed His Position !!