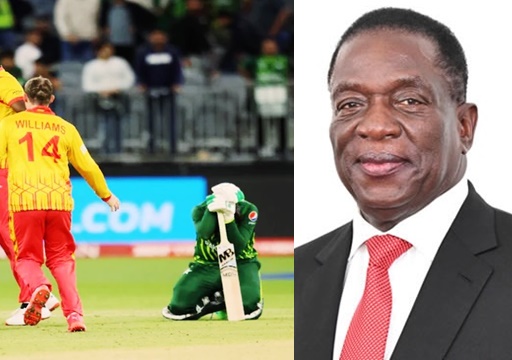 Zimbabwe President Trolled Pakistan After They Lost By 1 Run!!

President of Zimbabwe Emmerson Mnangagwa came up with a tweet in his official Twitter handle trolling team Pakistan after they won them by just 1 run in the ongoing T20 world Cup tournament. The president asked the Pakistan country to send original Mr. Bean next time referring to a viral comment of his team’s fan prior the match. 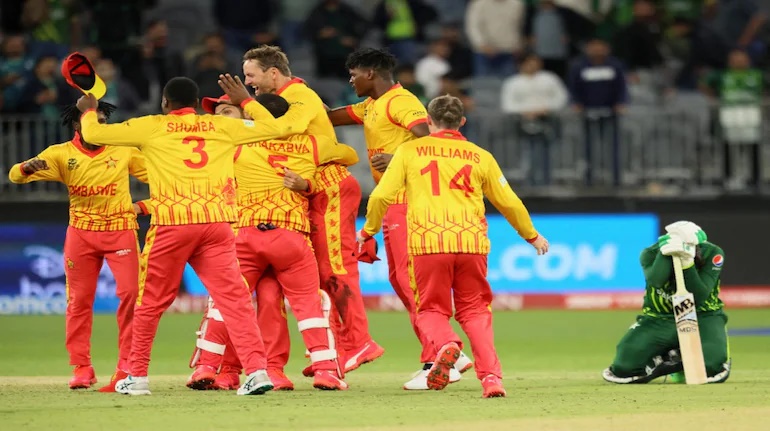 Scoring just 130 runs in the first innings of the match, team Zimbabwe surprised the cricket fraternity by beating Pakistan in the last ball thriller. In the last ball, the Babar Azam led team had to score 3 runs and Shaheen Afridi was facing the ball. They couldn’t run more than 1 run as the fielder in the short mid off threw the ball to the keeper in a swift.

The historic win made headlines across the globe and the President of Zimbabwe couldn’t resist himself from celebrating the victory. “What a win for Zimbabwe! Congratulations to the Chevrons.Next time, send the real Mr Bean…#PakvsZim”

What a win for Zimbabwe! Congratulations to the Chevrons.

As far as the Mr. Bean reference is the president’s tweet is concerned, country Pakistan is accused of sending a fake Mr. Bean to Zimbabwe for an event and it was exposed by one of the fans of the Zimbabwe team through his Twitter comment.

A comment made by Zimbabwe team’s fan in one of the posts of team Pakistan’s official Twitter handle, has caused a huge tussle among the fans of game cricket across the world. The fan claimed that Pakistan betrayed the people of Zimbabwe by producing a fake Mr. Bean after promising them about inviting real Bean. The comments went viral in social media platforms with hilarious reactions from fans all over the world.

Here is the footage of Pakistani, Mr. Bean in Zimbabwe. The controversy is getting out of hands 🤣pic.twitter.com/BW3oc3oZbm

On 25th of October, team Pakistan came up with a post in their official Twitter handle with a series of pictures of their fans getting ready for their next match against team Zimbabwe. After losing a crucial match against India, the twitter handle of the team management said “On to the next challenge” with the hashtag “We Have We Will”

Among the many who commented to the post, a Zimbabwe fan named Ngugi Chasura dropped a comment saying “As Zimbabweans we wont forgive you…you once gave us that Fraud Pak Bean instead of Mr Bean Rowan ..we will settle the matter tommorow just pray the rains will save you…#ZIMVSPAK”

When a Pakistan fan asked him what happened, Ngugi said “They gave us Pak Bean instead of Mr Bean on one of our local events called agriculture show”

When another user asked what’s mean by Pak Bean, the user dropped a picture of the fake Mr. Bean and said “This is tha fuck called Pak Bean who imitates Mr Bean stealing peoples money”

Report suggests that a few years back, a Pakistan man named Asif Muhammad travelled to Zimbabwe in 2016 who is look alike of the iconic character played by Rowan Atkinson. Report stated that the person and question did Road shows, attended a comedy night and was part of the Harare agricultural show.

The tweet became insanely viral with hilarious reactions from cricket fans across the world. check out some of the reactions that surfaced for President’s tweet below :

Mr President if you’ve similar kind of issues with India please let us know. We would like to rectify it before our match against you. Why take chance and make Pakistan feel any better on Nov 6th.

Congratulations Mr.President, to celebrate this special moment, we would like to send Baba Ramdev to Zimbabwe for free yoga classes. 🙏 pic.twitter.com/10FtFeVIOp

Previous articleWATCH : Azeem Getting Called Out For His Gesture Towards Shivin!!
Next articleAshwin Kumar’s First Ever Stage Speech After The Controversy!! WATCH