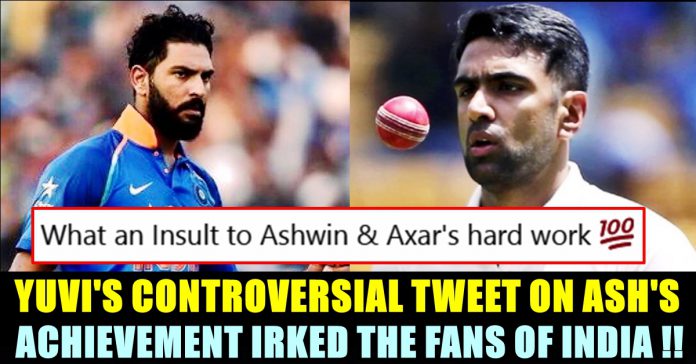 Ashwin became the second fastest bowler to pick up 400 test wickets with having legendary Sri lankan spinner Muttaiah Muralitharan ahead of him. The Chennai based cricketer took 77 test matches to achieve the feat whereas the Tamil speaking Sri lankan cricketer picked up his 400th wicket in his 72nd match. Entire Internet, along with experts and celebrities from several other industries lauded the cricketer for this achievement after he made England’s Jofra Archer out.

Well done, keep it up @ashwinravi99.

A big congratulations to the spin maestro @ashwinravi99 on achieving a stellar milestone of 400 Test wickets. Way to go. #INDvENG #Pinkballtest

Big congratulations Ash on your 400 test wickets. Next destination 500 @ashwinravi99

Big congratulations Ash on your 400 test wickets. Next destination 500 @ashwinravi99

Meanwhile, a tweet uploaded by former all rounder Yuvraj singh irked the fans of India cricket team. The 2011 world cup winning player said that Anil Kumble and Harbhajan Singh would have got 1000 and 800 wickets in a wicket like Ahmadabad and wished Axar and Ashwin for their performances.

“finished in 2 days Not sure if that’s good for test cricket !If @anilkumble1074 and @harbhajan_singh bowled on these kind of wickets they would be sitting on a thousand and 800 ? However congratulations to India, @akshar2026 what a spell! congratulations @ashwinravi9 @ImIshant” read the tweet of the cricketer.

finished in 2 days Not sure if that’s good for test cricket !If @anilkumble1074 and @harbhajan_singh bowled on these kind of wickets they would be sitting on a thousand and 800 ?🤔However congratulations to 🇮🇳 @akshar2026 what a spell! congratulations @ashwinravi99 @ImIshant 💯

This tweet irked the fans of Indian cricket who came up with comments criticizing the former all rounder. Many humorously said that Harbhajan is using Yuvi’s phone whereas many others asked him to celebrate the win instead of judging the skills displayed by the new age cricketers.

you're supposed to be a role model. have some shame.

Can you come out of nostalgia ? Anil & Bhajji in fact had graveyards to bowl on in India. That is why they got the wickets they have. Give credit where due. Ashwin & Axar were good. And age gracefully Bro.

You have started to talk like your dad, India has always had turning tracks, only difference is back then we had proper test batsman who knew how to bat on turning track, hence the matches lasted 5 days, now batsman just focuses on IPL and other shorter format.

You are still stuck in that era. Move on. Celebrate the win

What an Insult to Ashwin & Axar's hard work 💯

May be bad pitch but unnecessary loud comparison