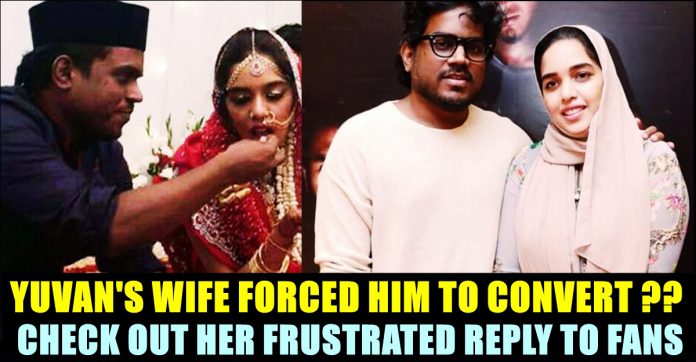 Zafroon Nizar, wife of popular music composer Yuvan Shankar Raja slammed his fans who kept asking her whether she forced him to convert as Muslim. Yuvan Shankar raja, one of the prominent music directors of Kollywood film industry, has composed for more than 100 films in a span of 23 years of his musical career. He has acquired a huge loyal fan base for himself through his work. The forty year old music composer is currently working on several projects and turned as a film producer as well.

When Zafroon conducted a Question and answer session in Instagram with her followers, many of them insisted her to answer on Yuvan’s conversion as Muslim. In February 2014, Yuvan announced through his Twitter account that he had embraced Islam religion and acquired the name “Abdul Khaliq”. He married to Zafroon on the 1st January of 2015 and the couple had a baby girl on 7th April 2016. They named her as Ziya.

According to Sify.com, one of a fan blamed Zafroon by saying that she converted Yuvan into a Muslim. “Nalla Iruntha Yuvan-ah Ipdi Maathittingle, Paakave Kashtama Iruku” the fan said through his comment to which Zafroon immediately replied by writing “That shows how shallow you are”.

Zafroon is a fashion designer by profession who got trained in Dubai. Though she dropped out of the course in the final year, she is passionately working on opening a boutique soon. Comment your views on this reaction of Zafroon to those who are very much concerned about the religion of Yuvan and his family members !!