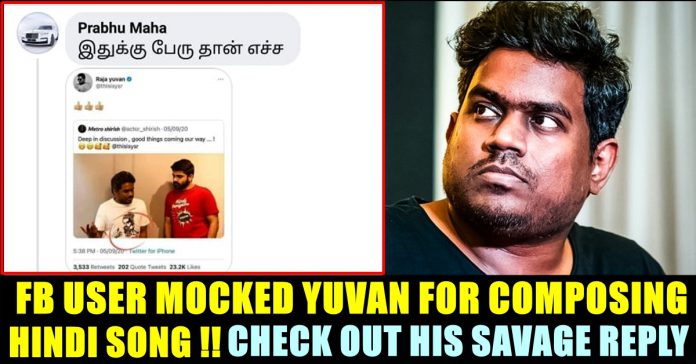 Yuvan Shankar Raja who is known for delivering several hit albums for films in Tamil film industry, recently came up with a music track “Top Tucker”, a Hindi Track. The song featured him along with south Indian actress Rashmika Mandanna, Badshah, Jonita Gandhi and Amit Uchana. The song which was directed by Amarpreet Chhabra, got the lyrics of Vignesh Shivan.

As soon as getting released, the four minute long video song garnered 10 million views in twitter. Yuvan has been sharing the youtube link of the song in his official social media handles. Sharing it in Facebook, the music composer wrote “My first ever collaboration for a Hindi track with All hearty and heartful Punjabis ✌️ Brace yourselves as you’re in for a funfilled ride with #TopTucker- all yours now!”

This post from the musician garnered huge reception from his fan and followers. Many posted comments lauding the singing, dancing abilities of the music composer. Meanwhile, a Facebook user, referring to a viral picture of Yuvan and metro shirish, uploaded an abusive comment, slamming him for wearing the t-shirt which said “Tamizh speaking Indian”. The music composer who doesn’t involve himself much in online spats, decided to reply for the abusive commentor.

It all started when actor Sirish who is known for acting in a film named as “Metro” posted a picture with music director Yuvan Shankar Raja by wearing a “Hindi Theryathu Podaa” (Don’t know Hindi, get lost) t-shirt. Yuvan who is considered as “youth icon” wore a T-shirt saying “Tamizh Pesum Indian” (Tamil speaking Indian).

Though it is work related post of the emerging actor, the caption in his T-shirt attracted wide number of online user. They who oppose Hindi imposition in Tamil nadu, started celebrating the post of the duo.

The celebration elevated to a next level as soon as the hashtag “Hindi Theriyathu Poda” started trending in the micro blogging social media site. Celebrities including political personalities posted pictures in their respective social media accounts by wearing the T-shirts.

Now, on the recent post of Yuvan, a follower named “Prabhu Maha” uploaded a comment abusing the music composer for wearing the T-shirt and doing a straight Hindi song. Check out his comment below :

Replying to this abusive comment, the 41 year old music composer, in a subtle manner, replied saying that what his T-shirt says in the picture the abuser shared is a fact. “tee shirt says ‘Naan oru tamizh paesum Indian’
& that is a fact ! 😎” Yuvan replied and garnered two thousand plus likes for it so far.

This reply is going insanely viral in the other social media platforms with netziens trolling Prabha Maha.

Previous articleJwala Gutta Got Upset On The Replies She Received For Her Grandma’s Death !! Vishnu Vishal Supports
Next article“Concrete Houses Will Be Built For People Who Belong To Scheduled Caste” – Chief Minister Edappadi K Pazhaniswamy !! WATCH

Mohan G, director of "Draupathy" film questioned the caste identity in popular director Gautham Vasudev Menon's name. He who is getting highly criticized by...