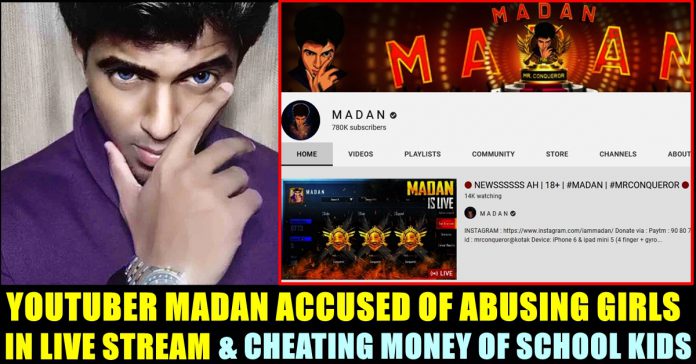 A youtube channel named “Madan” which streams games such as “Free Fire” with 7 lakh plus subscribers, accused of abusing girls and cheating money from small kids and students, according to a report of News 18 Tamil nadu. The complaint was made to the police officers of Chennai cyber crime. Through the audio released by News 18 report, it could be understood that a person named Madan who runs the youtube channel degrades girls by abusing them while streaming games in his youtube channel.

By using the subscribers (mostly kids) who are involved in playing the game, a group of people cheating their money, says the report. The Youtube Channel “Madan” was launched saying that it will teach players about the Strategies, Tips and Tricks for the now-banned game PUBG mobile. School studying students who are interested in playing the PUBG game received the channel by subscribing it.

However, those who run the channel started making contents through abusive conversations and through degrading girls. After seeing the reception of abusive videos, a separate channel named “MADAN 18 +” was launched. The one who runs the youtube channel, initially hid his identity like the Tamil film characters and boasted about himself through his videos, according to News 18. He degraded girls and abused them in the pretext of being real.

In the audios that were released in Internet, Madan could be heard abusing girls effortlessly. “Just because you are a girl, you think that I would listen to you. Get lost. You know this is 18+ right, why are you even participating” he says to a girl. The youtube channels were linked to an Instagram account named “MADAN”. The Instagram account is used to inform followers about the timing of the Live and to listen to his abusive conversations, many kids are joining the game.

While playing, the kids are informed that money is being collected by the channel to make donations to homeless people. The cell phone numbers to transfer money through Google pay, Paytm apps are displayed in the screen. Many subscribers have sent their money to the youtube channel, according to reports. Receipts for donating the money haven’t submitted to the subscribers, adds the report.

A legal complaint has been made against “MADAM” youtube channel for targeting kids, students and brainwashing them to earn money. When the users of Instagram asked Madan why he is abusing girls through his videos, he reportedly made videos abusing them. Social activists who are aware of the crimes committed by Madan, has made a complaint to Chennai Cyber crime. Legal actions for obscenity, abusing girls, cheating the money of kids and students without proper documents are expected to be taken against the youtuber.

Previous articleYou Just Can’t Miss The Bio Quotes Of These “Union Creatures” !!
Next articleNot Sai Pallavi But This Top Heroine Was The First Choice To Play “Malar” Teacher !! Alphonse Opened

“Just Leave The Kids” -Suriya To Photographers Who Tried To Capture Pictures Of His Kids !!

A video of actor Suriya requesting media not to click pictures of his kids is going viral in social media platforms. The actor, after...