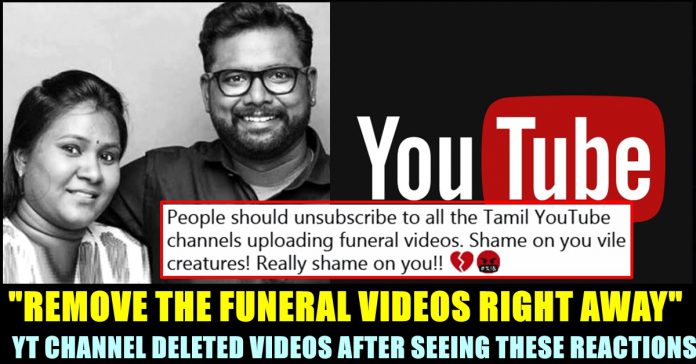 Along with film editor Suresh, several users of the social network platforms condemned a number youtube channels for streaming the funeral videos of Sindhuja, wife of film director Arunraja kamaraja who succumbed to COVID 19 virus. Reacting to the tweets, Galatta youtube channel removed the videos and asked apology to T.S Suresh.

Demise of Sindhuja, Director/Actor/Writer Arunraja Kamaraj’s wife made the celebrities of Tamil film industry to mourn in grief. It is reported that she was hospitalised as soon as getting infected with the virus and the condition became worse despite of the treatment. She passed away as her health didn’t respond to the treatment which made the entire film industry to console the filmmaker who rose fame among audience through directing “Kanaa”, a motivational sports drama.

Many celebrities came up with tweets to console Arunraja for his loss. Actor and Politician Udhayanithi Stalin, Actor Sivakarthikeyan visited the funeral to pay their last respects. Meanwhile, a number of youtube channels seemingly streamed the videos of the funeral in their space. Popular film editor T.S Suresh who is known for working in films such as “Tamizh Padam 1 & 2”, “Maya”, “Dagaalty”, uploading a tweet expressing his disappointment over the videos uploaded based on the funeral of Sindhuja.

he immediately uploaded a tweet asking the channels to take the videos down and requested his industry colleagues to co-operate with him. “People should unsubscribe to all the Tamil YouTube channels uploading funeral videos. Shame on you vile creatures! Really shame on you!!” he said in his initial tweet and continued to demand the removal of such videos by writing “Hey @behindwoods &
@galattadotcom Kindly remove the funeral videos right away. I’d urge the film industry to join me in requesting them to takedown these videos. Dear industry colleagues, please take a stand and refrain from giving interviews to these channels until such time.”

People should unsubscribe to all the Tamil YouTube channels uploading funeral videos. Shame on you vile creatures! Really shame on you!! 💔🤬

Hey @behindwoods & @galattadotcom, Kindly remove the funeral videos right away. I’d urge the film industry to join me in requesting them to takedown these videos. Dear industry colleagues, please take a stand and refrain from giving interviews to these channels until such time.

Along with Suresh, many other users of Twitter condemned the channels for streaming such videos in their space.

All the YouTube channels/news channels, have the basic decency to not take pics and videos of funerals. Respect people's privacy for God's sake. Yes, they are in the film industry but that doesn't mean you can poke your nose inside their personal lives. Are you not ashamed?

. @behindwoods – Disgusting *****
They actually filmed the video of the last rites of a celebrity's wife and put it up on YouTube.

Will these so-called YouTube channels be shooting and uploading the videos of last rites if an unfortunate incident happens in their family? Have some shame!

Replying to the tweets of Editor Suresh, the official twitter handle of Galatta youtube channel came up with a reply tweet writing “Dear @editorsuresh, we would like to inform you that we have taken down the mentioned videos. We understand your concern and value your feedback. Thank you.” and Suresh thanked them back for the appropriate action.

Previous articleJayam Ravi’s Reply To A Reporter On How Much He Donated Wins Internet !! WATCH
Next articleOnline User Criticized Losliya For Conducting Photo Shoots Amidst Pandemic !! Check Out The Reply Of Her