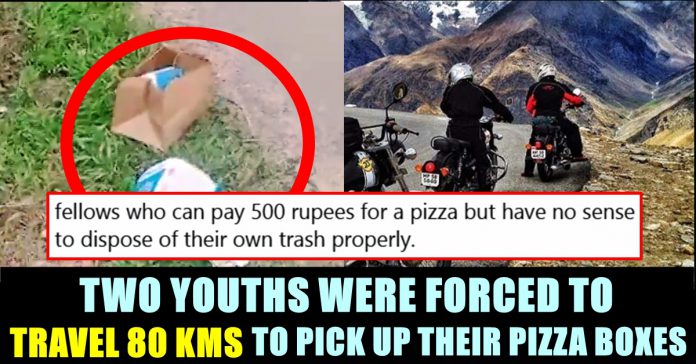 Many of us would have seen or been the person who throw garbages from our vehicle instead of dumping it in a garbage box. Even after so many campaigns, awareness, movements and Public service advertisements, people who throw litters effortlessly on roadside without considering the consequence, are still existing. This incident that took place in Karnataka is going to act as an eye opener for those who are involving themselves in committing such crime. According to reports, two youths were forced to travel 80 plus kilometres with the help of social media platforms to pick up the litter they threw after eating Pizza from their vehicle.

Kodagu Tourism Association’s General secretary, Maditira Thimmaiah cleaned up the tourist spot with the help of the members of Kadagadalu Gram Panchayat during last Wednesday. He cleaned it up after the place got littered by the vehicle users who visit there. He was very much keen on keeping up the hill station clean. To prevent people from throwing garbages there, he was keeping a close watch.

On Friday, at around 2 : 15 PM, While returning to his house, he saw some pizza packets tossed on the road side. He felt extremely dejected on seeing all his efforts of keeping the place clean went in vain. Before throwing the pizza packets into the garbage, Meditira Thimmaiah decided to open it up and see. Luckily he found the bill of the food item which had the person’s phone number. “I called up the person and requested him to return to the spot and pick up the waste” he said to the media.

The youth who picked the call apologized but refused to return and pick up the waste. He reportedly reasoned that he went past Kodagu and could’t return. The General secretary immediately called the local police officials who tried to make them come back only to fail in it. However, Meditira, without giving up, tried another way to make them come back to correct their mistake.

Meditira shared the phone number he found in the pizza box to social media platforms with the details of the entire incident. As a result of it, many people started calling the duo who caused the mistake and requested them to collect their trash by coming back. Embarrassed by the multiple phone, the youth returned at around 3 : 45 PM by traveling nearly 80 kms to pick up their trash.

After handing them over the pizza boxes, people of the locality wrote the duo’s phone numbers and names on them as a warning, suspecting that they would throw it again somewhere. This news caused social media reactions as well.

These are urban fellows going on weekend joy rides to pristine places and wrecking them too. Good this shaming worked. Civic sense is zero in the urban so called educated fellows who can pay 500 rupees for a pizza but have no sense to dispose of their own trash properly.

Awesome… These kind of strict enforcements will raise the needed awareness. People who create such mess and are just bothered about themselves and do not care for a better society.

Do this for everybody and keep bins everywhere and follow strictly. Then it is worth. Just catching a few and removing vengeance and then leaving the other places dirty is no use

What if every plastic we buy had a seal on it having our name and phone number.

Comment your views on the way this issue has been handled !!

Manjima Mohan of "Achcham Enbathu Madamayada" fame opened on her the reports that are doing rounds about herself marrying her "Devarattam" co-star Gautham Karthik....

Actress Kaniha Replied To Bayilwaan Ranganaathan Who Slut Shamed Her !!

Actress Kaniha, during a question and answer session she conducted with her Instagram followers, replied to a fan who asked her to share about...