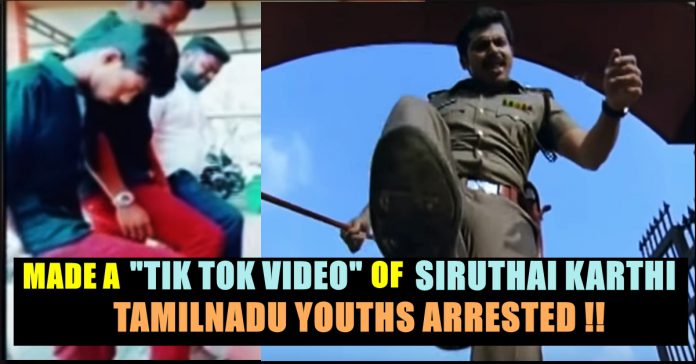 Micro-vlogging app TikTok has won over tweens, stunned the business world, and perplexed anyone over the age of 18. The social media platform is a fusion of Vine’s short video format, Snapchat’s interactive filters, and Musical.ly’s lip-syncing gimmick. At least so far, this trifecta has helped rustle up hundreds of millions of active users and boat-loads of cash. In Tik Tok you have a variety of options when creating music videos. You can choose from hundreds of thousands of songs and use a bunch of tools to personalize your video: from virtual stickers to camera speed controls.

Many teens of Tamilnadu also got addicted to the app and several videos are surfacing on Internet from Tik Tok in a daily basis. Now to our shock four teens from Tamilnadu has been arrested for doing “Tik Tok” video.

Yes, all they did was nothing but recreating a scene from the movie  “Siruthai” which was released in 2011. But what went wrong is the location they chose to do the video.

Four people from Virudhunagar district, who created a fun video clip through media app Tik Tok outside a police station landed in trouble as they were arrested for showing the latter in poor light.

The four visited Sivakasi East police station on Thursday seeking passes to take part in the death anniversary of Deivendra Kula Vellalar Federation leader Pasupathi Pandian that was observed on Friday. As the entire police strength, except a woman constable in the station was deployed for bandobast duty, they created the clip making use of the situation.

They imitated a clip from the Tamil movie Siruthai starring  Karthi. The video, which went viral did not take much time to reach the police officials in Virudhunagar district. However, they were not amused by the video as it showed police in a bad light.

Based on a complaint from sub-inspector of the station Muthumariappan a case was registered under IPC Sections – 504- intentional insult with intent to provoke breach of the peace, 505 (1)(a) – disrespecting police officers, 294 (b) – using obscene language and section 67 of the Information Technology Act.

The arrested were identified as Murugesan, 24, from Thulakkappatti Gurunath, 24, and Eashwaran, 21, from Maraneri and Thangeshwaran, 19, from Anaiyur. They were lodged in a prison after being produced before a judicial magistrate.