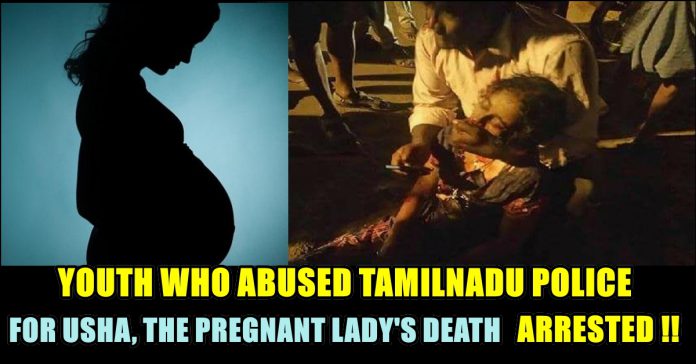 A 27-year-old youth living in Kuwait was arrested by Tamil Nadu police upon his return for appearing in a video on social media where he was seen lashing out at the police over the death of Usha, a pregnant woman from Tiruchy who died in March this year after a police officer kicked the bike she was travelling on.

Sankaralingam C, a young man from Nedungulam in Sivagangai district, had allegedly posted a video on social media and WhatsApp in March, berating the Tamil Nadu police and the government over Usha’s death. In the 5-minute 20-second video, Sankaralingam is seen talking about the tragic incident that took place on March 7th, when the 34-year-old pregnant teacher died after a traffic policeman kicked the bike she was riding on with her husband in Thuvakudi near Tiruchy.

The victim sustained head injuries and died on the spot after falling from the bike which wobbled after the officer kicked it. “For not stopping their bike, the traffic police officer (Kamaraj) has chased and kicked them,” he says. He goes on to criticise corrupt police officers in the video.

Tamil Nadu police said that the youth has been arrested because he ‘foulmouthed’ the police.

“He shared the video on social media on March 7th – the day of the accident – and it came to the attention of the Tiruchy police on 21/3/2018. In the video, he foulmouthed the police and the government using filthy language. We immediately registered a case against him,” Thiruverumbur police inspector Madan told TNM. A case was filed under sections 153 (wantonly giving provocation with intent to cause riot) and 505 (1) (b) (publishing or circulating any statement, rumour or report with intent to cause or which is likely to cause fear or alarm to public or provoke any section of the public to commit an offence against the State or against public tranquility) of the IPC and Section 45 of the IT Act, 2000, the officer confirmed.

The accused, when the case was registered, was working as a driver in Kuwait. The police officers spoke to the respective authorities and a lookout certificate was issued against Sankaralingam, Thiruverumbur police confirmed. “We conveyed the details to the immigration authorities,” Madan added. “Once he landed in Thiruvananthapuram, the airport police took custody of him and handed him over to the local police in Kerala,” Madan added.

The accused is now in the custody of Thiruverumbur police and investigations are underway.

Previous articleCan’t Keep Dinesh Karthick Away From Talking Tamil In Mic !! This Video Is An Absolute Bliss !!
Next articleActor Shiva Brutally Trolled His Director C.S Amudhan Without Any Mercy !! Asks Him Do An Original Film !!

After Karnataka's home minister Araga Jnanendra said that religions should be kept away from education and ordered that students should neither come wearing Hijab...

This Popular Instagram Model Is Going To Play Female Lead In “Draupathi” Mohan’s Next !!

Director of one of the most controversial film of the year “Draupathy” is all set to start his next project it seems. Made...