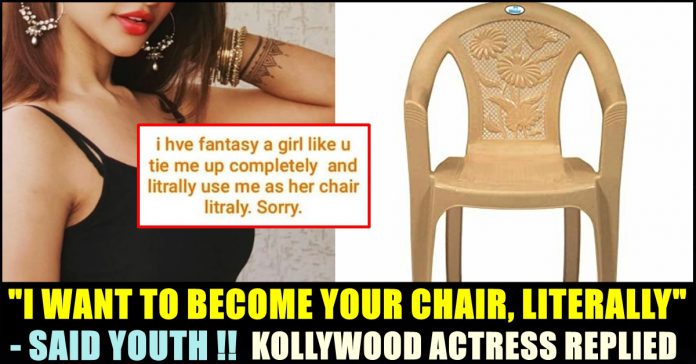 After actress Anaika Soti of “Kaaviyathalaivan” fame came up with a question asking her followers to reveal their “deepest darkest secrets”, she happened to witness some of the weird things that were committed by many of her followers. One of a follower came up with the most weirdest secret of him and the actress gave him an apt reply to school him and the youngsters in her followers list who are following her with similar mindset.

The Uttar Pradesh based actress debuted to Tamil film industry through director Vasantha balan’s “Kaaviya Thalaivan” and she paired up with actor Siddharth in the film. Followed by that, she established her acting career across the film industries of the country. Most recently, she paired with actor Santhanam in the comedy flick “Parris Jayaraj” and has also performed an item number in Rio Raj’s “Plan Panni Pannanum”. She acted with Kollywood’s young sensation Atharvaa in “Semma Botha Aagathey” as well.

She is currently enjoying 5 lakh plus followers for her Instagram account and the 30 year old actress is pretty much busy engaging her followers amidst the lockdown situation. On Saturday, she cameup with a story demanding her followers to tell her their darkest secrets. Among the many, a follower said that he wants to be a chair for a girl like Anaikaa. “I have a fantasy. A girl like you tie me up completely and literally use me as her chair, literally. Sorry”

Replying to him, Anaikaa said the parents of the youth must have spent lakhs of money on him, imagining that he would become a Doctor or Engineer and trolled his fantasy of becoming a “chair” to her by saying that he wishes to be a chair that’s worth Rs. 200. “Parents spent lakhs of rupees on your education thinking you’d become an engineer or a doctor, but here is their son, aspiring to become a
200rs Neelkamal chair.” reply of the actress read.

Another follower said that he has crush on his friend’s girl friend whereas another opened on his crush with his aunt. One of a follower went on to reveal that he is smoking illegal drugs without his mother’s knowledge. Check out how Avantika replied to them below :

Fun apart, Anaikaa also tried to help out a youngster who was financially struggling to meet ends amidst the COVID 19 lockdown. Anaikaa uploaded the screen shots of his message and asked her followers to suggest him a job as a result of which many came forward to help the youngster which is evident through the texts he sent to the actress.

Let us take a moment to appreciate the actress for the kind gesture she displayed in a tough phase of all our lives. Let’s wish “Love Lee leo” to get a new job soon as well !!