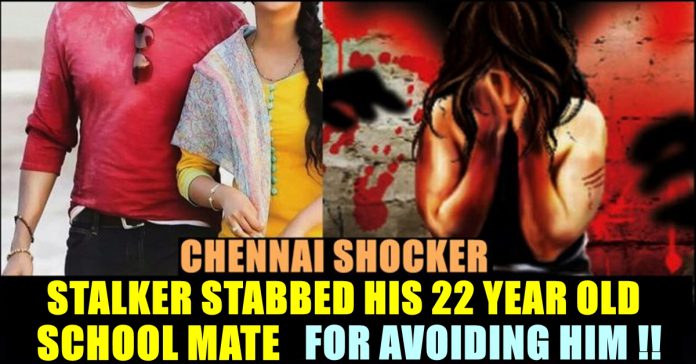 A 22 year old youth named as Sudhakar stabbed his school mate Premalatha Puthagaram after getting rejected by her. She has been admitted at Stanely Government hospital, where she got sutures in the stomach and is said to be recovering. Meanwhile, Puzhal Police have launched a hunt for the accused.

According to Police officials, the duo were in a relationship since school days and the victim who is working at a software firm in Ambattur, recently started avoiding Sudhakar, who is running a mobile recharge shop, citing his behaviour and on seeing the people he was connected with. She stopped meeting him and avoided attending his phone calls after finding his behaviour unacceptable. This went on throughout the last month and Sudhakar started harassing her while stalking which led Premalatha to warn of Police arrest.

Angry over the rejection, Sudhakar reached the residence of Premalatha during the wee hours of Thursday, despite of her several warnings. Police said that the accused threatened Premalatha to create an outrage if she refuses to come out of her house. Premalatha who is living with her mother, came out to meet him without having no other choice.

As soon as she stepped out of her house, Sudhakar stabbed her and left her inside the bathroom. Premalatha’s mother who rushed to the bathroom hearing the cries of her daughter, got shocked on seeing her daughter lying in a pool of blood. With the help of the neighbours, she rushed her to the Stanely government hospital.

After getting the information, Police officials rushed to the spot and inquired about the heinous crime. A case has been registered and a hunt has been launched to nab the accused who escaped the spot with the weapon. Sections 447 (criminal trespass), 448 (house trespass), 294 (B) (obscene behaviour in public place), 334 ( voluntary causes hurt on grave and sudden provocation), 307 (attempt to murder) of India Penal code has been filed against Sudhakar.

Police said that Premalatha and her mother were living alone in their house after the demise of her father a few years ago.