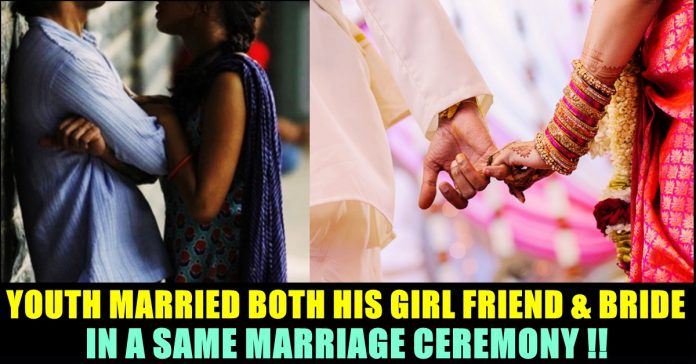 As the entire world is struggling to combat the global pandemic caused by the COVID 19 virus, a youth from India’s Madhya Pradesh married both his girlfriend and bride chosen by his parents in a same marriage event. This first of its kind wedding was attended by a whole village and took place in front of the three families. The most shocking fact about the marriage event is that it got conducted with all the rituals and formalities of a traditional marriage.

The groom named as Sandeep Uike, a resident of Madhya Pradesh’s Betul, married two woman at a marriage ceremony on July 8. The marriage ceremony took place at Keria village under Ghodadongri block which located 40 kilometres away from Betul district. According to reports, The district administration is currently investigating on how such weird marriage happened.

The two women whom Uike, a tribal youth, married are from Hoshangabad district and Koyalari village of Ghodadongri block. When Uike was studying in Bhopal, he met the woman from Hoshangabad district. They both fell in love and were developing a romantic relationship aiming to marry each other. Parents of Uike who weren’t aware of his relationship, decided to marry him to a girl on their own choice. They talked to the family members of the girl from Koyari village and did arrangements for his marriage.

This led to a dispute and a Panchayat was conducted to resolve the problem between the three families. The Panchayat authorities decided if both girls are ready to live together with Uike, then both of them should be married to him. To our shock, both the girls agreed to Panchayat’s final conclusion.

In Keria village, the wedding ceremony took place where the young man solemnised the marriage with both the brides, taking seven rounds of the sacred fire. The members of the village along the family members of all the the brides and groom attended the marriage function. All the rituals were performed in this first of its kind marriage.

“The families had no objection and they themselves decided to go ahead with the marriage” said Mishrilal Parate, vice-president of Janpad Panchayat Ghodadogri, and a witness to the marriage.

However, Monika Vishwakarma, Tahsildar of Ghodadongri has said that no permission for marriage was sought by the family members as public are required to get proper permission from the authorities to conduct marriage amidst COVID 19 pandemic. An official was sent for an investigation into the matter by the Tahsildar.

This incident caused a field day for meme creators as they are coming up with hilarious posts trolling the marriage ceremony.

Producer K Rajan who is known for his controversial speeches against actors and directors, in a recent event that took place for an upcoming...