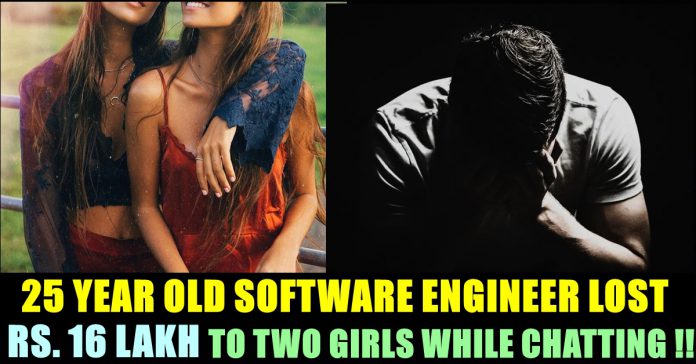 Youth Lost Rs. 16 Lakh To Two Girls While Chatting With Them In A Dating App !!

A 25 year old, Bengaluru based software engineer lost Rs.16 Lakh after fraudsters threatened to upload his nude pictures and videos online. It all started when the youth met a woman named Shwetha on a dating application and she asked him to pay Rs. 2000 through a digital payment wallet.

After that, Shwetha, reportedly provided her friend Nikitha’s mobile numbers to him. Nikitha made a video call to him and he happened to see her posing nude in that call. Later, the techie realized that the call was recorded and the pictures and videos of himself without clothes were captured by the women.

They started using the pictures and videos to blackmail him, according to a police officer. The techie also said that two more women, Preeti Agarwal and Sherin, threatened to upload the video if he failed to pay. “I transferred Rs.16 lakh through online banking, Google pay and Phonepe between December 3 and December 13” the victim said in his complaint filed on 14th of December.

Police of Whitefield registered a case against Sherin, Shweta, Preethi Agarwal and Nikitha under Indian Penal Code sections 419 (punishment for cheating by personation) and 420 (cheating) and sections 66 (C) and 66 (D) of Information Technology act. Investigations are currently underway to arrest the culprits.

In another case, a 21 year old man met a woman through a dating application on November 23 and the gang used the same method to blackmail him. In a single month, five cases of women extorting money from men after luring them into stripping during video calls were reported at cyber crime police stations in a month. A 39 year old Police officer got cheated by these women and became one of these victims, according to reports.

The incident has created huge outrage in social media platforms and the efforts on creating awareness about such gangs are being made by the users of it.

Previous articleVideo Of A Man Accusing Lalitha Jewellery Of Cheating Him Is Trending In Internet !!
Next articleRamya Pandiyan’s Brother Comes Up With An Emotional Post !!

Madras High court ordered Sterlite copper plant in Thoothukudi to remain closed on Tuesday and the political leaders of all the parties welcomed the...