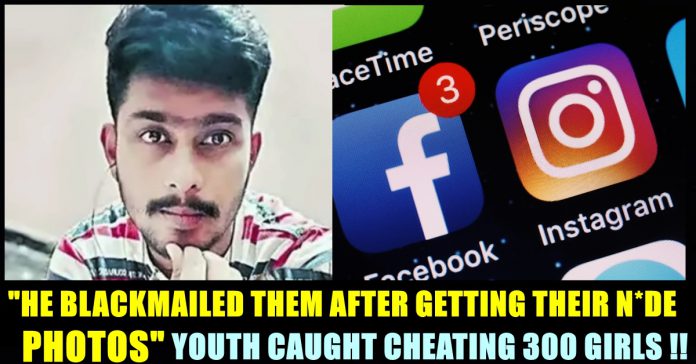 Police found that a Youth who initially got arrested for stealing valuables, is an accused who cheated 300 plus girls in social media and threatened them after receiving their private pictures. The incident happened it Andhra Pradesh and the Police came to know about the details after checking his cell phone in which he had the pictures of female children and young girls. It has been revealed that the guy named Prasanna Kumar blackmailed girls after getting their pictures from them in social media platforms.

Prasanna kumar was initially locked up in a Police station regarding a Theft case. At the end of the Police interrogation, it has been revealed that he is a serial cheater who betrayed girls and women in the pretext of marrying them. Prasanna kumar aka Raja reddy belongs to Chennupally village that is located in Kadappa, Andhra Pradesh.

He who turned down visiting college to get educated, involved in many illegal activities and got nabbed by cops in a regular manner. Police officials recently arrested Prasanna Kumar regarding a theft that took place on 29th of July. Cops confiscated Rs. 1 lakh 26 thousand money from him with 30 grams of gold and cell phones and interrogated him.

The cops got shocked after knowing about the details about the accused. On seeing the obscene pictures of several women and girls in his cell phone, Police intensified the interrogation. During the investigation, it has been revealed that Prasanna kumar used applications such as Facebook, Instagram and Share chat to lure girls.

In the pretext of marrying them, Prasanna kumar asked them to send their private pictures. The accused reportedly blackmailed the women who send their naked pictures and videos to him and the report also says that he had forced sexual relationships with the women who sent him their pictures. No complaints has been registered against him by any of the victims and the Police have lodged the criminal in jail after producing him in court based on the pictures that were found in his cell phone.