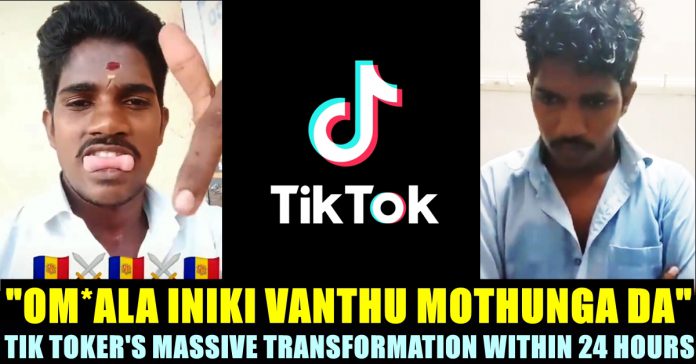 After replying to a twitter user who requested to make a Tik Tok guy slip in bathroom, Thiruvannamalai police made him to apologize for his tik tok video in which he threatened people to kill to prove his caste is superior. On the second year death anniversary of Kaduvetti Guru, a politician and leader for vanniyar sangam who was twice elected as a Member of the Legislative Assembly in Tamil Nadu, a youth named as Pachiyappan made a Tik Tok video and used abusive language and challenged people to fight with him.

Not many days ago, number of twitter hashtags trended in Twitter to ban Tik Tok, a micro video posting social media app. People who wanted the chinese app to get banned in India, highly believed that it influences youngsters from rural parts of India to involve in violence. Now, in a way of proving it, Pachiyappan, a youth from Arani of Thiruvannamalai, in his video can be seen using extreme abusive language to prove his caste as superior.

“You come confront me today, I say. Our respected sir, Kaduvetti Guru, he is our God. If you come to fight against us, we will slash you head and will keep it near our leader’s statue. No Military or Army could take control on us.” says Pachiyappan to his Tik Tok followers. He further informs them about his address and wants them to reach Arani to fight with him.

On seeing this video, one of a twitter user tagged the official twitter account of Thiruvannamalai District police and requested them to make him slip in bathroom. Replying to the tweet, Thiruvannamalai police said that a case has been registered and actions are being taken.

Few moments later, a video of a same guy asking apologize got surfaced in Internet. The youth says that he did the video while he was in an intoxicated state after consuming alcohol. “Police officers brought me to the station and advised me. I made ill statements while I was drunk. I request everyone to forgive me” he said in his video.

Few months ago, a similar incident took place in the tamil speaking state where a youth asked apology for similar reason. “The tik tok video I posted about caste was uploaded by someone in Youtube. Everyone making fun of me since it got uploaded in Youtube. I am studying 11th standard and I want to study 12th standard further. Please help me for my education. My parents are very much worried because of my activity. I belong to Tirunelveli, Alangulam. Even my friends are not happy with what I did. People from all the caste are my relatives and I require every one of them to live. I won’t do this again and I don’t intend to divide them.” said Muthu in his apologize video.

Many other youths are involving in making such videos through Tik Tok app. It is high time for their parents to make them stop before getting severely punished by Police to post an apologize video.