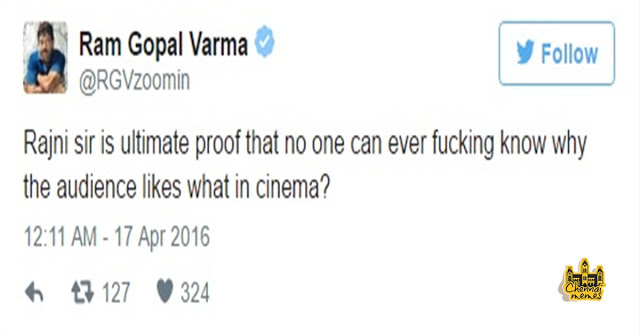 Rajnikanth! Yes, the name itself is enough to make you feel the potency of the word. Once a bus conductor, this person came to some alien state and got identified by some legend and got an entry into movies! Yes, the rest is history as you know..

Rajnikanth as you all know is a super star and some people have even conferred the title of ‘God’! He has given some brilliant performances in South Indian movies and has left no stones unturned in Bollywood too. Recently, he also received the Padma Vibhushan award from President Pranab Mukherjee.
But it seems, this hasn’t gone well with some people who have all time in the world to ‘TWEET’! Yes, you got it right! KRK and RGV have trolled Rajnikanth for no reason, over his picture with Amy Jackson! Have a look..

This is What KRK Says!

“Swear, Either hero should be like him or shouldn’t be hero; lols”

You don’t understand Rajni phenomenon? You are crazy

The greatest psychiatrists in the world will collapse with the challenging task of explaining the Rajni Phenomenon pic.twitter.com/1WkQXkh3bh

Nowhere in world a man who looks like this can be SuperStar .I wonder what he did to God that God did this to him pic.twitter.com/k32oXkbVmn

He is a bad looker! Oh really RGV?

He is a bad looker,doesn’t have 6 packs ,short with a disproportionate body n knows just 2 nd half dance movements pic.twitter.com/Ht4RROzDiG

He even used some bad words! Mind your tongue

Rajni sir is ultimate proof that no one can ever fucking know why the audience likes what in cinema? pic.twitter.com/BqNaWKakfu

Looks are not important for stardom?

This man by being the biggest star ever completely destroys the notion of looks being important for stardom pic.twitter.com/YLeA7PiYRs

People just bashed out at KRK and RGV! This is their immense love for Rajnikanth!

KRK he is not ugly from inside like you!

@RGVzoomin At least he is not ugly like you from inside.

No one matches his charisma!

@RGVzoomin But Nobody match his style and charisma… We Love him 😍😍😍

RGV what God did to you?

@RGVzoomin And I wonder what you did to God that God did this to you,You look ugly too!

He has PhD in Mannerisms!

@RGVzoomin but did his phd in mannerisms and style of action

@SKengond @RGVzoomin Its not ONLY the external appearance that make a man what he is.there r many more qualities..for instance his humility

Why do you direct movies!

@RGVzoomin Like audience never know Why the fuck you direct movies anymore?

His talent and hard work is enough for him

@RGVzoomin And proves the fact that with talent and hard work you can achieve anything!