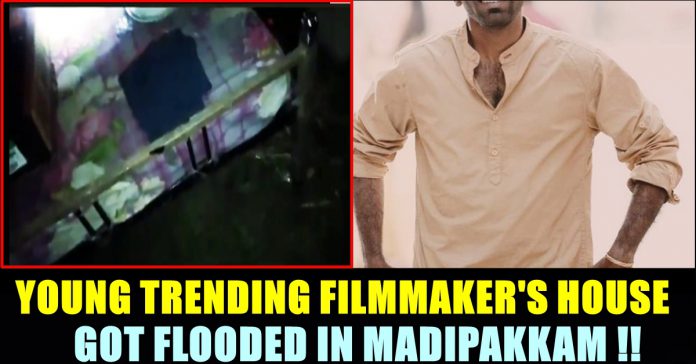 Madipakkam, Puzhuthivakkam, Pulianthope and KK Nagar are some of the areas that got severely affected due to the water logging that caused by the “Nivar” cyclone. According to reports, the city corporation had received 302 complaints of which 135 have been resolved and rest are in various stages of completion. Meanwhile, young and emerging filmmaker Pradeep Ranganathan who rose to fame by directing jayam Ravi starrer “Comali” has shared a series of videos of house that is located in Madipakkam. He could be seen locking the house and leaving with his father after his house got flooded by knee deep water.

The impact created by “Cyclone Nivar” across the state Tamil nadu is huge. Many parts of the capital and Kadalur district didn’t have electricity since the noon of Wednesday. Precautionary measurements were activated by the government and the authorities are working on full swing to bring the situation to normalcy.

Now, a video uploaded by director Pradeep Ranganathan had gained the attention of Internet users. Captioning the video as “My home”, Pradeep mentioned the location “Madipakkam” in his Instagram story. The electricity was out and the filmmaker could be seen searching for the lock along with his father. After finding it, he locks his house and leaving.

After making several short films, Pradeep made his directorial debut with Jayam Ravi’s “Comali” under the production of Vels Film International. Not only Pradeep, many other people who are living in the low lying areas suffered without shelter and electricity. A woman living in Chennai questioned why government provided permission to build house in such places if they are not eligible. She said that government hasn’t learned its lesson from the 2015 floods.

“If this is a low lying area, The Chennai Metropolitan Development Authority shouldn’t have provided the approval. They shouldn’t have sold these plots and provided electricity to the houses.” she expressed her disappointment. “I have only one house. Where would I go if they shoo us away during every monsoon?” she questioned.

Having made its landfall over Tamil Nadu as a Very Severe Cyclonic Storm during the early hours of Thursday, November 26, Cyclone Nivar has since weakened gradually. At present, it sits as a well-marked low pressure area over South Coastal Andhra Pradesh and neighbourhood, and is set to bring heavy showers to parts of the state throughout the day.