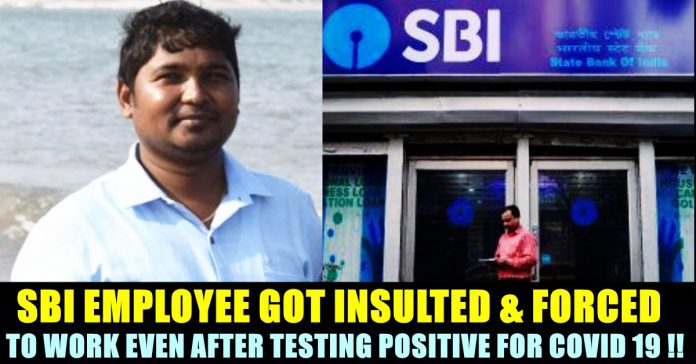 Pitta Rajesh, a 39 year old bank employee who was working for State Bank of India died after testing positive for COVID 19. His death has created hue outrage across the country as he was forced to work even after testing positive for the deadly virus. The incident took place in Vizag, Andhra Pradesh and it was reported that the higher officials denied leave for him several times before his demise.

Employee union have now called for stringent action to be taken against higher officials after Rajesh’s death. Despite of the repeated request from Rajesh, even after testing positive for COVID 19 character, the senior officials denied to grant him leave, The SBI officers association has claimed.

The SBI officers association has claimed that Rajesh was suffering from fever since 25 of August. Rajesh sanctioned leave for the field officer who tested positive for the COVID 19 on August 28. When Rajesh approached his higher officers to get leave after testing positive, he was informed that unless he submits a COVID 19 report, leave wouldn’t be sanctioned.

The association accused the higher officials by saying that they forced Rajesh despite severe fever and symptoms of COVID 19. Rajesh made another request on 30th of August but his request was denied. On 31st of August, yet another request was made but the HR manager did not pick up the call and according to the association, the Regional manager turned down the request by saying that deputation cannot be arranged where only two officers are posted.

On September 1, when the transformer near the bank branch blew and operations were stalled, the cash-incharge, seeing Rajesh’s health condition, decided to take him on his bike to get tested for COVID 19. When the result showed positive, Rajesh requested for leave but again his request was denied by the regional manager and the HR manager, the association said. Instead, they asked him to submit the copy of the report as proof to rant leave.

After submitting the printed copy of the result, the leave was sanctioned. But Rajesh’s health worsened by the time he was granted leave. Even after getting admitted to Government general hospital of Kaakinada, Rajesh was forced to attend meetings through online. Rajesh was insulted and targeted by the Regional manager during the review meetings. He passed away on 11th of September.

This death of Rajesh sparked outrage across the country. The United Forum of Bank Unions posted a tweet saying that it was a planned murder. “We Demand Death Sentence against AGM Vishakhapattanam FIMM, Manager HR & State bank of India Its planned murder of an innocent Manager. Even SBI has violated norms of DM Act.If @APPOLICE100 dont lodge FIR under IPC307 we will be forced to do protest in front of CM Office.#KillerSBI”

We Demand Death Sentence against AGM Vishakhapattanam FIMM, Manager HR & @TheOfficialSBI
Its planned murder of an innocent Manager. Even SBI has voiltaed norms of DM Act.

If @APPOLICE100 dont lodge FIR under IPC307 we will be forced to do protest infornt of CM Office.#KillerSBI pic.twitter.com/P335H8hpEv

Rajesh’s wife who couldn’t come in terms with the shock of her husband’s demise, tested positive for COVID 19. Users of social media platforms demanding strict actions against the officials of the Bank.