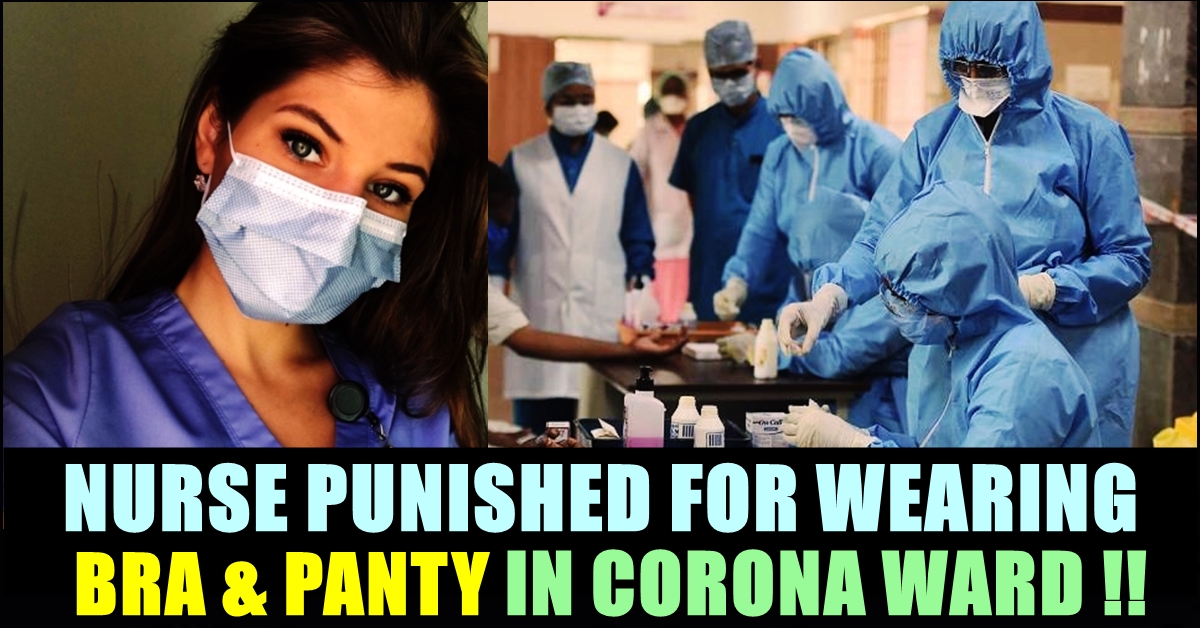 Doctors across the world are having their hardest times due to the spread of deadly virus COVID 19 which killed more than 3 lakh people around the globe. Treating patients by wearing PPE (Personal Protective Equipment) kit is one among the struggles being faced by the medical professionals. The kit which is used to secure doctors from contacting the virus from the patients they are treating, is in high demand but hard to use as a doctor could not remove it for the next 6 hours after after wearing it. Now, a young female doctor got punished by authorities for treating patients just by wearing her inner wears with transparent PPE gown to avoid the heat.

The doctor’s identity is not revealed and she is said to be in her 20s. Due to the unbearable heat she decided to wear her lingerie beneath the transparent PPE kit. A particular picture of the nurse treating patients with such way is doing rounds in social media platforms. Sources reported that one of a patient in the all male coronavirus ward clicked the picture. The picture shows the nurse doing her job in the ward during an aged patient looking at her in the backgorund.

The incident took in Tula 100 miles south of Moscow. The patient who clicked the picture, reportedly said that no patients in the ward made complaint against her clothes. However authorities of the hospital decided to punish the young nurse for “non-compliance with the requirements for medical clothing”.

The nurse who has been under scanner since the incident happened, said to her managers in Tula Regional Clinical hospital that she is not at all aware of the fact that the PPE kit would be completely transparent. She said that she decided to put on just lingerie as it becomes too hot inside the protective gear. Despite this, the regional health ministry reported that “a disciplinary sanction was applied to the nurse of the infectious disease department who violated uniform requirements”

Nurse who only wore underwear under transparent PPE gown on male hospital ward in Russia because she was 'too hot' is disciplined (but the patients don't seem upset!)😅 pic.twitter.com/CgMnuoAJ2p

This nurse in Russia was disciplined for wearing bra & pant under her PPE. But none of the patients complained. Even from the pic, you can tell that this male patient was showing signs of improvement on seeing this glimpse of paradise pic.twitter.com/Y4goX1XrKF

This nurse in Russia went the extra mile to 'treat' her patients. 👇🏿 pic.twitter.com/dQ3lu2D17p

Russian internet users went one step ahead and started making illustations of the nurse.

Responding to the incident, regional health ministry said “Employees were reminded of the need to comply with the requirements for sanitary clothing and appearance” . Comment your views on this act of the nurse !!