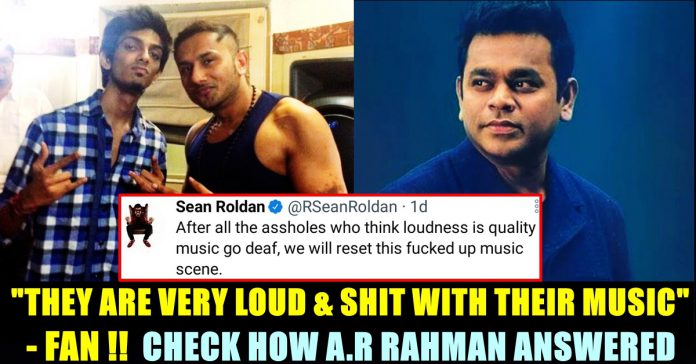 Music director Sean Rolden who is known for providing some quality music through films such as “Sathuranga Vettai”, “Pa. Paandi”, “Joker”, came up with a series of tweets criticizing the loud music being made nowadays. The musician who deleted his tweets now, called people who make loud music as “A**holes” and asked them to go deaf. He also criticized the listeners and believed that they are a part of it. Followers of him believed that Sean is criticizing new age music directors such as Anirudh, Hip Hop Tamizha etc. However, the “VIP 2” musician said that he himself is a part of it.

“After all the a$#holes who think loudness is quality music go deaf, we will reset this fucked up music Scene.” wrote Sean Rolden in his first tweet.

Followed by this, Sean added another tweet writing “And whatever I am complaining about, I am very much a part of it. So don’t use this to hate somebody. Grow up men.” and said “Some of you are thinking that l attacked someone. Whoever you’ve mentioned have proven their talent and musically adept. But, what about you the audience? You’re half of the problem. Don’t throw stones at anyone. Think about what I said. I know it won’t change soon.” through his third tweet.

Check out some of the replies the music directed gave to some of his followers.

They played good music, loudly. But loudness didn’t define their quality. The honesty in their music did. Still too much of loudness not acceptable to the body. Not a question of liking something but to be aware of its effects on the ears. Hendrix became deaf!

I leave them to deal with consequences. Sugar is bad. But who stops eating it. Cause May be a personal choice. Effects are not up to your choice

When Sean decided to delete his tweets, it became too late as people started reacting to it by capturing screen shots. Check out some of the reactions Sean caused through his tweets :

How much do I wish Sean Roldan shuts the fuck up and sticks only to music, Go n do albums like Pa Paandi and Mehendi Circus n fuck off da dei 🤦‍♂️🤦‍♂️

Sean Roldan flipping out and the stocks doing a U Turn? Hmm

Meanwhile, a twitter user came up with a video showing how A.R Rahman reacted to a question through which he was required to answer on the loud music being made by musicians such as “Honey singh”. The questioner, to Rahman, said that Honey singh and Badshah are shit with their music and asked Rahman to answer on how he remains calm.

“I think we should appreciate every kind of music. In India, there are many tastes. Some people are sad so Honey singh makes them happy. Some people want melancholy so they listen to A.R Rahman. So we should respect every Art form.” the two times Academy award winner said.

Comment your views on these perceptions of the musicians and fans !!