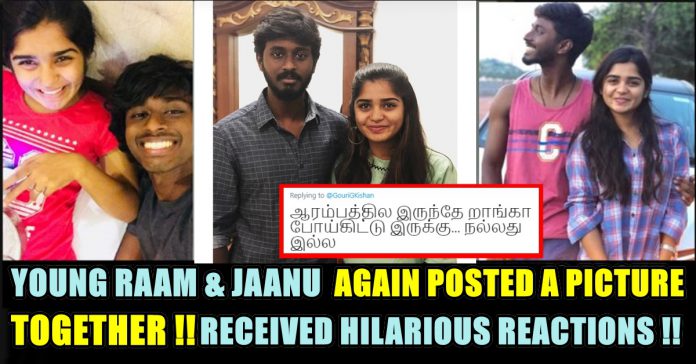 The journey of “96” the film will break your hearts a hundred times over, leaving you alternately comforted and pained as nostalgia washes over. The premise of the film is deceptively simple – two high school sweethearts from the batch of 1996 (which lends the movie’s title) meet at a reunion, 22 years after they part. Vijay Sethupathi is a travel photographer and Trisha, who plays Janaki Devi aka Jaanu, is settled in Singapore. The film however, fails to tell us if she actually has a job. Understandably, the sparks are still present and visible for all to see. The story moves back and forth from the past to the present, to lay the foundation for this love story, even as it takes you on a parallel journey of events unfolding in the reunion.

But that is where the movie’s predictability ends. Vijay Sethupathi and Trisha share a chemistry that crackles to life on screen. The only competition to their compelling presence are the artists who play their younger selves – Aditya Bhaskar and Gauri Kishan. You can’t help but root for the pair (past and present), from the minute you lay your eyes on them. As we all know Adhithya baskar is the son of popular supporting actor in Kolywood M.S Bhaskar. As the Junior Couple’s performance was very well received by the audience , earlier it was rumoured that the reel life couple is in relationship in real life.

As an effect of this rumour both the actors took their official twitter account to clarify on the issue. Aadhithya Baskar wrote “Myself @AadhityaBaaskar and @Gourayyare just friends. Bestestest friends. We are not in a relationship. Please try to understand that Actors do have Personal Life. Thank you#stopspreadingfakenewsThanks for supporting #96TheMovie” Myself @AadhityaBaaskar and @Gourayy are just friends. Bestestest friends. We are not in a relationship. Please try to understand that Actors do have Personal Life. Thank you😊#stopspreadingfakenews
Thanks for supporting #96TheMovie

The Junior female lead Gouri G Kishan took her twitter account and wrote “@AadhityaBaaskar and @Gourayy are NOT in a relationship. No, we’re not in love with each other. We both played the part of #Ram and #Janu as lovers on screen NOT off screen. Please stop spreading these #FalseAllegations & #FakeNewsShow some #Respect“

@AadhityaBaaskar and @Gourayy are NOT in a relationship. No, we’re not in love with each other. We both played the part of #Ram and #Janu as lovers on screen NOT off screen.
Please stop spreading these #FalseAllegations & #FakeNews
Show some #Respect pic.twitter.com/EFONum4c58

Now the female junior lead again posted a picture with Aadhithya which was received hilarious reactions from her followers. Check out the post here :

Here’s some of the selected reactions :

They both clearly mentioned that the only relationship between them is friendship which was falsely portrayed by some people. But still some people trolling them as couple. What do you think on this ?? Let us know by commenting below !!

Previous articleThis Man Thrashed Woman Whose Dog Urinated On His House Wall !! SHOCKING VIDEO !!
Next articleSiva Kumar’s Explanation To His Rude Behaviour !! “I am Not Buddha” Says The Actor !!