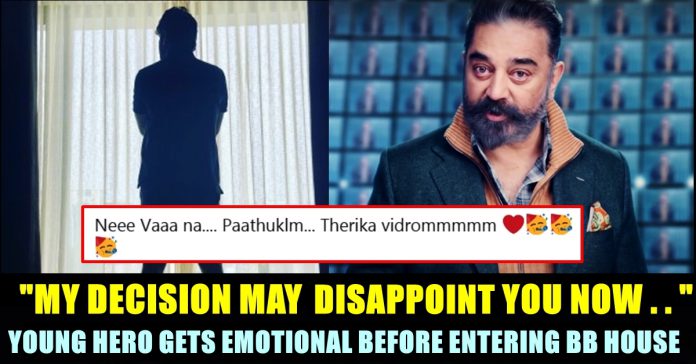 Former TV host Rio Raj who debuted as hero in the film “Nenjamundu Nermayundu Odu Raja” has officially confirmed his entry into the Kamal Haasan hosting Bigg Boss house by uploading a post sending a message to his fans, friends, family and relatives. He who got debuted in the Sivakarthikeyan production was expected to sign more movies for several filmmakers but surprised people by making the announcement about his Bigg Boss stint.

Bigg Boss 4 is all set to stream from the evening of today and the makers of it are busy producing promotional videos for it by having actor Kamal Haasan as the main man all these days. Speculations on the 14 participants are doing rounds in social media platforms. So far Ramya Pandiyan, Gabriella, Shivani Narayanan, Anu Mohan, Rio Raj, “Jithan” Ramesh, Singer Aajeedh, VJ Archana, Sanam Shetty are being considered as confirmed contestants.

Now, one of the speculated contestant Rio, has made it official that he is going to enter the house as a participant. The contestants were quarantined in a same hotel all these days. Posting the silhouette pictures of himself in the hotel room, Rio raj said that his decisions may disappoint the audience but his actions won’t.

“My Decisions may Disappoint you, But my actions won’t Hugging face
To all my friends and fans Love you all” his tweet read.

My Decisions may Disappoint you, But my actions won’t 🤗
To all my friends and fans Love you all 🙏🏻#Rioraj 😈 pic.twitter.com/wRXoY5cCpC

Rio Raj who recently debuted in Tamil film industry as protagonist through “Nenjamundu Nermayundu Odu Raja” film was hosting selective shows in Vijay Television. Recently, he hosted the “We Are The Boys” gang of Bigg Boss Tamil 3 along with Ma Ka Pa Anand and show. Now, it has been reported that he is going to take part in the show was contestant.

Check out some of the reactions for Rio surprising tweet :