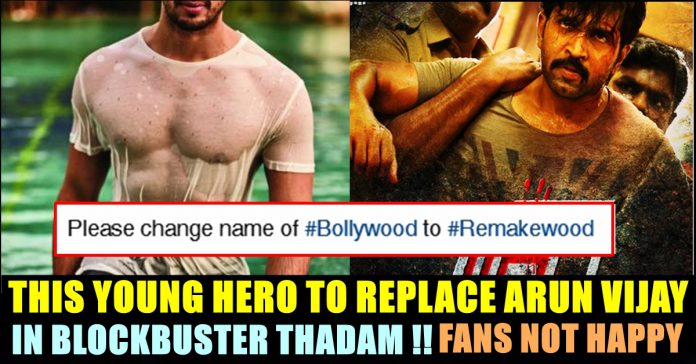 Though Gautham Vasudev Menon’s “Yennai Arinthaal” is considered as Arun Vijay’s strongest come back in his acting career, Magizh Thirumeni’s “Thadam” elevated his market in the industry to the next level. The film which had the actor in dual roles, infact as twin brothers, impressed audience in big time which resulted in the film becoming a sleeper hit. Apart from Arun, the film consisted Tanya Hope, Smruthi Venkat, and Vidya Pradeep in the lead roles. The music was composed by Arun Raj, with cinematography done by Gopinath and editing by N. B. Srikanth.

The unique concept and pacy screenplay engaged the audience. Followed by this blockbuster, Arun Vijay started signing movies as solo hero. As the film contained the potential to grab wider audience, producers and directors of other film industries started buying the remake rights of it. In Telugu, the film is being remade as “Red” and actor Ram Pothineni is playing the lead. Teaser of the same was released lately in which we can see Anirtha Aiyer and Nivetha Pethuraj replacing Tanya hope and Vidya Pradeep respectively.

Now, the film’s Hindi remake rights was also sold to Bhushan Kumar, a Hindi producer. Directed by Vardhan Ketkar, the film is going to have Sidharth Malhotra in the role played by Arun Vijay. Sharing the news, Siddharth happily said that he feels excited to do the film in his official twitter account. “Double trouble! Excited to be a part of this ultimate entertaining thriller” he wrote in his tweet.

Double trouble!
Excited to be a part of this ultimate entertaining thriller, in association with @itsbhushankumar, @MuradKhetani and #VardhanKetkar.
See you at the movies on 20th November, 2020@Cine1Studios @TSeries pic.twitter.com/6KwOTjeFG7

However, fans who watched Thadam are not happy with the makers of Bollywood remaking the original. “Spoiling original films like a Boss” said one of a twitter user whereas another one asked the Bollywood film industry to change its name to “Remakewood”

Siddharth Malhotra can't even match 10% of Arun Vijay. And only Magizh Thirumeni can direct such a thriller even if it's a remake. Would rather hear Sanket Mhatre dubbing it on Sony Max with Title 'Judwa 420'!

Omg! Hard to tolerate him solo..double role will be disaster

It is notable that Bollywood Superstar Ajay Devgan announced that he is going to act in the remake of “Kaithi”. Meanwhile Arun Vijay who just released his Mafia is all set to appear in a film directed by Arivazhagan and a film named as “Agni Siragugal” which is being directed by “Moodar Koodam” fame Naveen Kumar. Comment your views on Ram Pothineni and Sidharth Malhotra replacing Arun Vijay.

Previous articleBollywood Super Star Wants To Know About Vijay’s Diet Plans ?? WATCH
Next articleChinmayi Warned Girls About The Fake ID Of Her Husband !!

Actress Priya Bhavani Shankar's reply to a follower who asked whether she wouldn't feel boring to dress up, do make overs and pose for...