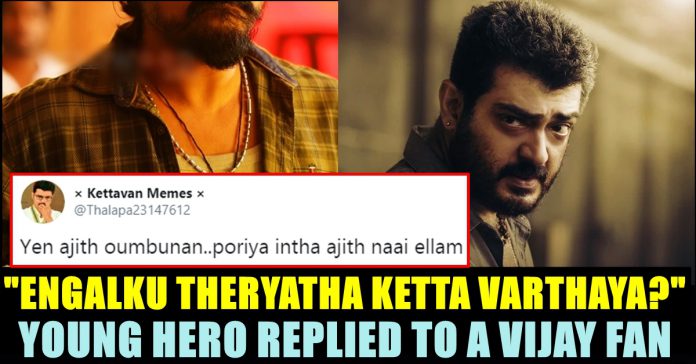 Since actor Ajith announced Rs. 1.25 crores to the governments and his cinema industry, fans of the actor are celebrating him by sharing the news across the Internet. As many people came forward to donate to PM Cares and CM fund relief, to help them combat the deadly Coronavirus which is being a threat to the whole world, people from cinema industry and sports industry are also donating big sum of amounts.

Ajith Kumar who has a biggest fan base has announced Rs.1.25 crores as donation. The actor reportedly provided Rs.25 lakhs for FEFSI workers and Rs.50 Lakhs for CM fund relief and Rs.50 Lakhs for Prime Minister relief fund. Actors Sivakarthikeyan, Vijay sethupathi, Suriya donated Rs.10 lakh each for the people who are suffering from their industry.

Ajith Kumar’s contribution instigated fan wars in social medial media as his rival actor Vijay is yet to make an announcement regarding his donation. As the release date of actor Vijay’s Master film got postponed due to the corona crisis, the production house came up with a new poster to console fans. Actor Krishna who is known for acting in films like “Kazhugu”, “Maari 2” posted the poster and wrote “How can #lockdown knock down thalapathy fans…. #Master yeppo vandhalum Master dhan. wait panradhulayum oru thrill irruke + Masterku Namma wait pannuradhu dhane mariyadhe Smiling face with smiling eyes”

To this post, one of a fan of actor Vijay asked how much he gave to the relief fund as he is receiving 80 crores as salary for a film. “Will he donate at least 10 crore?” he asked by posting a picture of Ajith.

In a way of replying to this comment, a Vijay fan abused Ajith and said that he gave money only after many people forced him to do that.

Actor Krishna, owner of the tweet, intervened them and asked them not to use bad words. “If you think using bad words making you a hero, think why your favourite heroes are not using it. If your are true fan, you won’t speak bad words and if you speak.. RIP” he said in his reply.

Followed by this, the actor also posted another tweet asking people to respect actors.

Yenghaluku theridha ketta varthaya..if u have fingers to type n see what u can type it doesn’t make u a hero..paathu pannunghe ji🙏🏼🙏🏼🙏🏼🙏🏼🙏🏼 all of us here respect every1 one of u🙏🏼 n v may not expect the same but try not to hurt our respect towards u. Okva na solluradhu 🙏🏼 gn pa

Comment your views on these replies made by Krishna !!

A youtube channel named "Madan" which streams games such as "Free Fire" with 7 lakh plus subscribers, accused of abusing girls and cheating money...