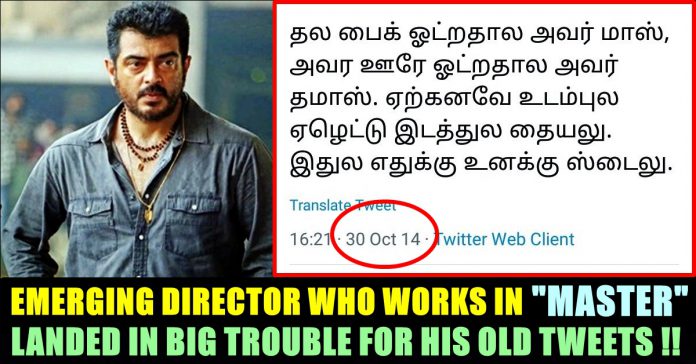 Director Rathnakumar who made films like “Meyadha Maan”, “Aadai” attracted the attention of the users of micro blogging social media site for the old tweets he posted before becoming a filmmaker. The director who is now working in actor Vijay’s 64th project “Master” as dialogue writer, is also known as one of an ardent fan of the actor.

Now several users of twitter has came up screenshots of Rathnakumar’s tweets from 2013, 14 and 15 in which he criticized actor Ajith, mostly in inappropriate ways.

Check out some of the screenshots below :

Director Lokesh Kanagaraj and Rathnakumar are sharing a healthy friendship between them which is evident through their twitter conversations. On seeing Rathnakumar, along with Lokesh Kanagaraj, many fans thought that he is going to associate with Lokesh in the direction department. As Rathnakumar is an ardent fan of actor Vijay, fans even thought that he is going to work as an Assistant director.

Later the director himself has cleared the air by posting a tweet in his official Twitter account. He said that he is going to work in “Master” as an additional screenplay writer. Check out the tweet he posted on the 3rd of October :

Fans of actor Ajith who saw these old tweets of Rathna got extremely angry and started expressing their hatred towards the filmmaker. “Thalapathy” Vijay and “Thala” Ajith are two of the most talented actors in the cinema industry of Tamilnadu. The rivalry between both the actors is less as far as the rivalry between their fans is considered.

Its been a long time since actor Ajithkumar and Vijay declared as official rivals. Though the actors themselves enjoying a healthy friendship between them, verbal spats between their fans has always been a never ending one.

Here’s some of the reactions against director Rathnakumar for the tweets he posted years back :

Step 1 – open a twitter account.
Step 2 – Troll Ajith and his family.
Step 3 – establish the contacts with VMI mafia.
Step 4 – You will contacted by Vijay’s PRO to work in his film.
🤷‍♂️ pic.twitter.com/CH0yC27msx

Though the filmmaker deleted all these tweets, do you think it is right for Netizens to troll him with the screenshots of it ?? Comment your views below !!