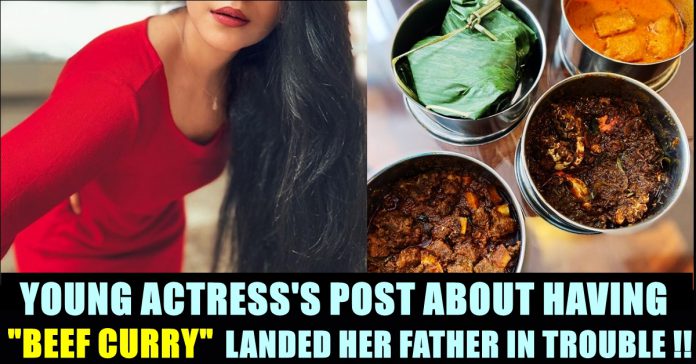 Young Actress’s Post About Having Beef Curry Landed Her Father In Big Trouble !!

Popular Malayalam actor Krishna Kumar who acted as a Police officer in Ajith’s Billa 2, joined the Bharatiya Janata Party on 3rd of February. He received the membership from party President JP Nadda in an event held in Thiruvananthapuram. A recent video of the actor saying that cows shouldn’t be killed is going viral in social media platforms with a social media post of his daughter which consists the food items such as beef curry etc. In a video interview, she also could be heard saying that Beef and rice is her favourite dish at home.

Even before joining BJP party, Krishna Kumar had been vocal in supporting the BJP led union government and Prime minister Narendra Modi. In the local body polls that held last year, The actor actively participated in campaigning for the candidates of the party.

His daughter Ahaana Krishna is known for acting in films such as Luca, Pathinettam Padi, Njan Steve Lopez etc. She is also pretty much active in Instagram with 2 million plus followers and has posted nearly 2000 posts so far. Most recently, a video of Krishna Kumar saying that cows shouldn’t be killed as we are drinking cow milk throughout the life. He also said that cow is like a mother to us.

However, the actor and BJP politician became a subject to online troll as soon a video of Ahaana Krishna admitting that beef with rice is her favourite dish at home was found. Watch the video here :

BJP candidate from Kerala says ‘We drink cow milk throughout the life so cow is like mother & it shouldn’t be k!lled.

The second part of the video is an interview of his daughter & she says rice with beef + is one of her favorite dishes at home.

Apart from this video, an Instagram post of Ahaana in which she posted a picture of a combination of food items that consists beef curry etc also going viral in social media platforms. Through the post, the young actress says that “Beef curry” is a good food and says that she misses her mother.

This post and interview of Ahaana landed her father in a big trouble as he is being widely trolled in the micro blogging social media site.

Even his 4 daughters(who are more popular than him) are not endorsing his campaign. 😂

Krishna Kumar has acted in many Malayalam movies and is now predominantly seen in Malayalam TV serials. In Tamil, he acted as a ruthless police officer in the sequel of actor Ajith kumar’s block buster film “Billa”. Ahaana Krishna is also actively acting in films.