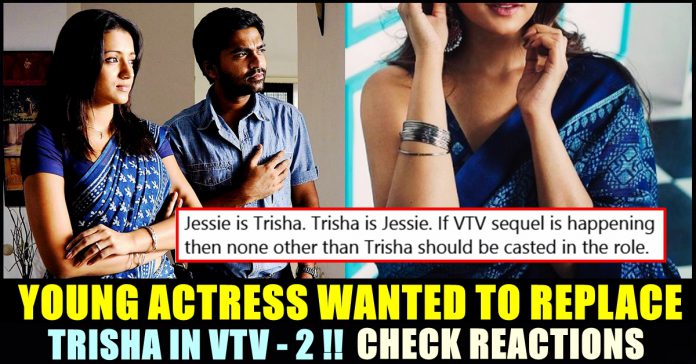 Talks on the sequel of the epic love tale “Vinnai Thaandi Varuvaaya” is doing rounds ever since the film released in the year 2010. It was reported that Madhavan might be doing the protagonist role in the film and it turned out to be a mere buzz. During the COVID 19 lockdown in 2020, a short film titled “Karthick Dial Seidha Enn” got released in youtube from the crew of “Vinnai Thaandi varuvaya” and hinted about the probable cast of the upcoming sequel. Now, a young actress named Reba John who gained fame through her role in Vijay’s “Bigil” has expressed her wish of replacing Trisha while uploading a video of herself in her official social media handles.

“Vinnai Thaandi Varuvaya” enjoys a separate fan base among the audience of Tamil cinema. The film’s plot revolves around an aspiring filmmaker who belongs to a Hindu family trying to marry Jessie, a Christian. He ends up making a film out of his own love story with a positive climax and fails to get her in real life. Simbu and Trisha who played Karthik and Jessie won the hearts of fans with their flawless performances.

“Karthick Dial Seitha Enn”, the short film which is a sequel of “VTV” in one way, focused on the writer’s block faced by Karthik, a filmmaker by profession. To help himself to write his script with a peace of mind, he calls Jessie who is a mother of two children now and seeks her help. He asks her to love him like she did before which helped him to write his debut film “Jessie”. She who hesitates initially goes on to talk her heart out to her ex-boyfriend.

On Sunday, actress Reba Monica John came up with a video in her official twitter account in which she could be seen wearing a blue saree and wrote “If ever VTV part 2 happens , you know who to call” as her caption in a light manner.

If ever VTV part 2 happens , you know who to call 😆 pic.twitter.com/G8uzNxK1T8

On seeing this video, many of those who are following her said that Trisha who acted as “Jessie” couldn’t be replaced by anyone. “nonono…you can act any other flims…Get more awards happie for that…. sure and best wishes !!! but jessie means its Trisha forever” a twitter user said.

Jessie is Trisha. Trisha is Jessie. If VTV sequel is happening then none other than Trisha should be casted in the role.

Previous articleDaniel Annie Pope Reacts To The Allegations Against Him !!
Next articleChennai Super Kings Gives Back To Rajasthan In Style !!

Video of an interaction of Andimuthu Raja, popularly known as A Raja, one of an important leader of the DMK party doing rounds in...

The news about a 19 year old boy completing the edit of the Pan Indian movie "KGF 2" and astonishing the entire Indian film...