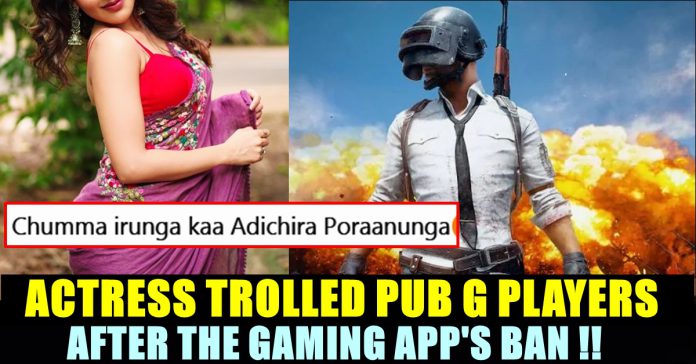 Entire social media is flooded with the reactions for the ban of PUB-G mobile application. While some of them are supporting the movie of government, players of the PUB-G game are extremely dejected which evident through the posts they are uploading in the social media platforms. Meanwhile, actress Ishwarya Menon who became an internet sensation through her recent photo shoots uploaded a post regarding the ban only to get trolled by the pub-g lovers.

The 25 year old actress who debuted through the sequel of Tamil parody film Tamizh Padam, posted a tweet saying that she never played the game ever. “Any PUBG fans here? what do u feel about the ban? Well I have never played it though” her tweet read.

Any PUBG fans here? 👀 what do u feel about the ban?
.
Well I have never played it though 🤪🥴
.#pubgban

Months after banning the micro video posting app Tik Tok, Central government has banned the widely played controversial game Pub-G along with several other mobile applications in India. This action was taken by the Indian government amid the tension over China’s provocation in Ladakh. There are more than 33 million PUB-G players are actively playing the game. The game clocks 13 million daily users, reports suggested.

Earlier, Indian government has banned 59 chinese mobile applications, including top social media platforms such as Tik Tok, Helo and We Chat. to combat the threat posted by these applications to the country’s “sovereignty and security”. UC browser and shopping app club factory are the other prominent apps that have been blocked amid rising tension between India and China following clashes at the border months ago. Now, along with PUB-G and Ludo, government has banned 118 mobile applications.

Check out some of the reactions for Ishu’s tweet :

Feeling numb. We pubg players don't believe in dating people for timepass rather we play pubg to enjoy our tranquility and pass our time.

Comment your views on PUB-G getting banned in India !!