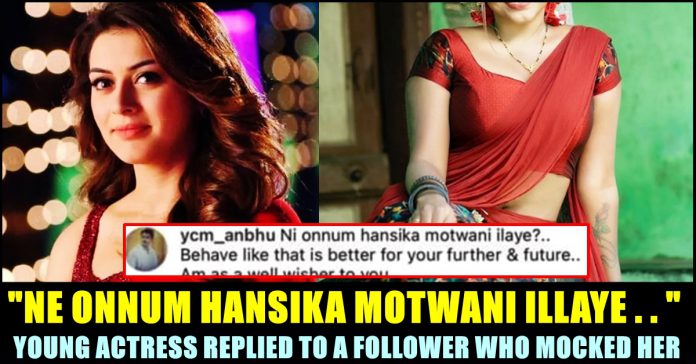 Actress Shalu Shamu who is pretty much active in social media platforms, recently replied to a follower who compared her with actress Hansika Motwani. After performing a reel for a popular independent song, Shalu shared the video with a caption saying “Kaathadi Pola Manasu …!!!!” as her caption. The post garnered 5k likes from her 5 lakh plus followers in no time.

On seeing this post of her, a follower named Anbhu dropped a comment saying that she is not Hansika Motwani and asked her to behave like that. He who identified himself as a well wisher of the actress, said that it is better for her future. “Ni onnum hansika motwani ilaye?.. Behave like that is better for your further & future.. Am as a well wisher to you..” read the comment.

Replying to him, Shalu Shamu said that he has no rights to talk about her future and iterated that it is her own problem. She further said that she doesn’t like herself getting compared with anyone and asked whether he thinks himself as Shah Rukh, Salam, Vijay or Ajith. “I’m Nobody & u don’t have any rights to tell me how I should or shouldn’t behave. My future is my problem that’s none of ur business. I don’t compare myself with anybody that’s y I have my whole view about my future. Hope u think Urself as some Shahrukh or Salman or Vijay or Surya.I Pity You As a Well Wisher.” Shalu’s reply read.

Shalu went on to screen shot the reply she made and said “Don’t compare with anybody because everyone are unique in their own way” through her story. Here’s the screen shot of it :

Actress Shalu Shamu who is known for appearing in Tamil films as a supporting artists, never shied away to give fitting replies to the trollers and abusers in online medium. Being an actress who appeared in Varutha Padatha Vaalibar Sangam movie as heroine’s friend, was Mr.Local in a small role, Shalu is currently enjoying 5 lakh plus followers for her official Instagram account and has been engaging her followers by uploading pictures from her photo shoots. Once Shalu shared about a filmmaker’s inappropriate behaviour towards her while interacting with her Instagram followers.

In a recent question and answer session with her followers, Shalu gave back to a number of people who asked obscene questions to her. Among the many who questioned, a follower wanted the actress to tell the size of her bo*bs. To make him shut down once and for all, Shalu replied to him saying “Definitely bigger than you _|_” Check : Shalu Shamu Replied To The Disgusting Questions Of Her Followers !!

Shamlee, sister of former actress Shalini released one of the most romantic pictures of Ajith and Shalini to celebrate the couple's 23 years of...