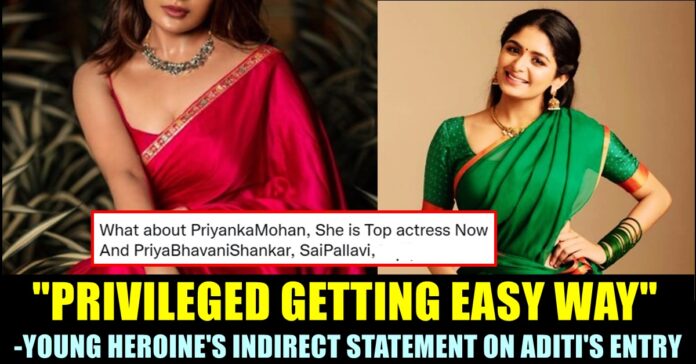 Actress Aathmika who is known for acting in films such as “Meesaya Murukku”, “Kodiyil Oruvan” and others, a couple of days ago came up with a tweet in her official twitter handle, saying that privileged are getting the easier way through the ladder while others are struggling. She also added the famous dialogue from “Vikram” which goes like “Paathuklam” and added a smiling tears emoji in her tweet and the tweet of the actress is trending in the micro blogging social media site.

Being a Tamil nadu born, Aathmika moved from Coimbatore to Chennai before completing her graduation. Hip Hop Aadhi made the actress to debut in his own directorial “Meesaya Murukku” and the actress singed “Naragasooan” of Karthick Naren. After that Aathmika acted n films such as “Kodiyil Oruvan”, “Kannai Nambathey”, “Katteri” etc. The tweet of the actress about privileged getting the easier way in ladder caused speculations among the audience regarding the entry of Adithi Shankar, daughter of renowned filmmaker Shankar.

“Viruman” is an upcoming film directed by Mutthaiyah of “Kutty Puli”, “Komban” fame. As said, the film marks the debut of Adhithi Shankar, director Shankar’s daughter and Yuvan Shankar Raja has composed the music. Karthi and Yuvan combo is known for their chartbuster albums such as “Paruthiveeran’, “Paiya” “Naan Mahaan Alla” and few others. Soori, Karunas, Rajkiran, Vaiyapuri, Ilavarasu, Prakash Raj, RK Suresh has joined the supporting cast of the film, cinematography and editing of which was done by Selvakumar S and Venkat Rajeen respectively.

The trailer launch event of the film took place recently in Madurai with the presence of fans and celebrities. With Suriya producing the film through his 2 D Entertainments, the film stars Karthi in the lead role and it is indeed a massive entry for the younger daughter of the Sivaaji maker. Adithi took part in the trailer launch event and received a positive reception from audience and leading celebrities such as Suriya as well.

As soon as the event took place, Aathmika came up with a tweet in her official twitter handle, writing “It’s good to see privileged getting easy way through the ladder while the rest 🥲 Paathukalam 🙌🏽”

It’s all about talent after the entry. Sai pallavi,Samantha,Anushka so much people to add on the list of non privileged

Don’t worry it’s not Bollywood only if u have stuff audience will enjoy or else they won’t even consider so be patience just give it a go. Choose your scripts wisely soon you’ll reach the heights my best wishes ❤️❤️❤️❤️❤️❤️

In kollywood Entry will be easy.
But staying relevant is still based only on talent unlike bollywood.

Previous articleFamily Followed Google Map & Ended Up In A Stream !! MIRACULOUS ESCAPE !!
Next articleHilarious Memes On This Recent Trending Template !!

The celebrity started his career at the beginning of the 90’s as an actor in order to have real experiences of acting for 25...

After receiving a massive response from the audience during the Pngal festival, Makers of "Master" decided to release the film on Amazon Prime Video...