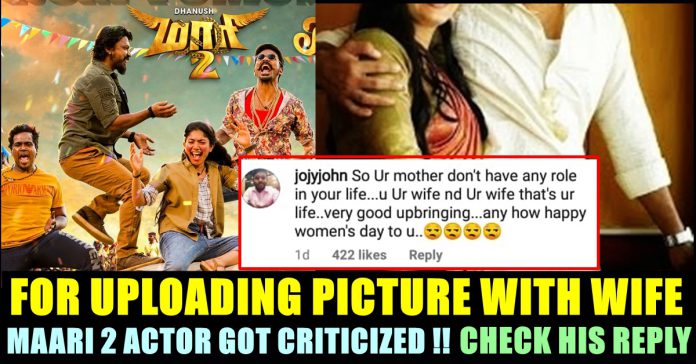 Tonivo Thomas is known among Tamil audience for his appearance in Dhanush’s Maari 2 as antagonist. Being one of the emerging actors in Malayalam cinema, Tovino’s performance in films like Ennu Ninte Moidheen, Lucifer gained him a separate fan base. He currently enjoys 37 lakh followers in the posting social media app.

As we all know International Women’s Day is a global day celebrating the social, economic, cultural and political achievements of women. The day also marks a call to action for accelerating gender parity. On 8th March, people across the world celebrated Women’s day by posting posts and photos in social media platforms. Tovino Thomas also did the same by posting a picture of himself with his wife and his child. He uploaded with a caption saying “Happy Women’s Day” in Malayalam. Check out his post below :

As we all know Social media don’t know the value of the emotions expressed by the celebrities in online medium. Many high profile celebrities got trolled and abused by random social media users in daily basis. Some would upload their posts and would never turn back to it due to the intolerance of abusive comments where the others would give them back right away.

To this post, one of his 37 lakh followers named as Jojy John criticized Tovino by blaming him for not praising his mother on Women’s day. “So Ur mother don’t have any role in your life…u Ur wife nd Ur wife that’s ur life..very good upbringing…any how happy women’s day to u..😒😒😒😒 “ he wrote in his comment.

Tovino who saw this comment, replied to him by explaining how he wished his mother and the reason behind not mentioning her in social media. “My mother is not active in any social media. I wish her directly. That was the first thing I did the morning ! For your information, I have a life outside social media. You should try too! It’s marvellous” he wrote as a reply.

Check out the screenshot of the comment and reply of Tovino :

Tovino Thomas was cast in a major role as the antagonist in Maari 2 with Dhanush. The Balaji Mohan directorial failed to broke box office records in Tamil Nadu during 2018 and he is expected to return to Tamil cinema soon. Comment your views on this reply by Tovino !!