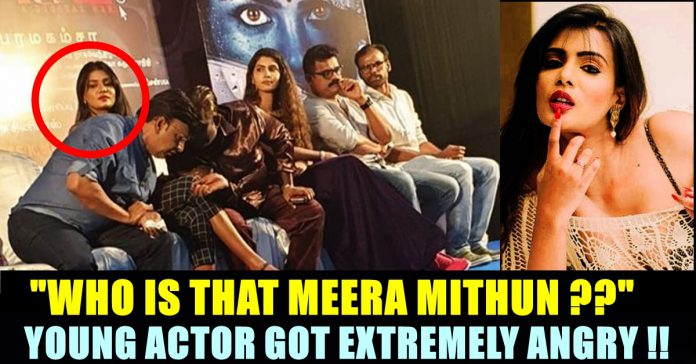 After that the actress involved in many controversies and several audio conversations of herself with her accomplices leaked. Now the actress’s presence in an audio launch of a Tamil movie has created controversy. In the audio launch of”Karuthukkalai Pathivu sei”, Meera Mithun was invited along with legendary filmmaker K.Bhagyaraj.

Now actor Abi Saravanan who also attended the function has expressed his disappointment over Meera Mithun’s presence in the audio function. Abi saravanan who was acted in films like Attakathi, Touring Talkies has uploaded a facebook post slamming Meera Mithun for the way she sat amidst the legendary icons.

In his post Abi Saravanan asked who Meera Mithun is to sit aside director K.Bhagyaraj. “I am posting this as a human being, not as an actor. I went to the audio launch of “Karuthukalai Pathivu Sei” which had the legendary people from the Tamil film industry such as Bos Venkat, director Kasthuri Raja, Producer KD Rajan, Poet Porko, Cinematographer Natti, PRO leader Vijaya Murali. By the way, Among these legendary people, who is Meera Mithun ?” asked Abi Saravanan in his facebook post.

Further he asked the makers of the movie why they invited her for such event. “In the presence of Bhagyaraj sir who is one of the best screenplay writers of India, this woman sat in crossed leg without respect” said Abi saravanan who also added that she should know how to respect elders.

Abi Saravanan compared Meera Mithun with a mushroom and questioned her for sitting that way in front of the legends who refused to behave the same way she did though they had every right to do so.

Previous articleWho Is Going To Play The Female Lead In Legend Saravana’s Debut ??
Next articleSuperstar Rajinikanth Fans Not Happy With Vijay TV !!