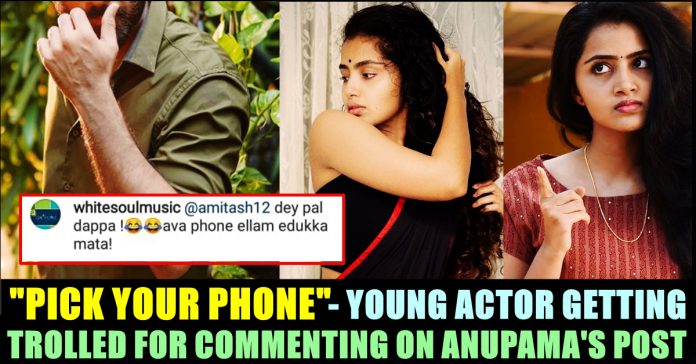 Actor Amitash Pradhan who is known among Tamil audience for acting in “Vela Illaa Pattadhari”, is getting trolled by the users of Instagram for dropping a comment on one of the recent posts of actress Anupama Parameshwaran. He asked the actress to pick his call up while reacting to her caption and grabbed the attention of the “Premam” actress’s followers. Amitash and Anupama are currently working on a film named “Thalli Pogathey”, directed by R. Kannan of “Kanden Kadhalai” fame. Atharvaa Murali is playing lead in the film which is expected to release soon.

Anupama debuted with Premam alongside Nivin Pauly, which was a commercial success. She then had a cameo in James & Alice, a Malayalam movie. Later she forayed into Telugu films with a handful of projects including AAa, where she played a lead role along with Nithin and Samantha Ruth Prabhu. She then was in the Telugu remake of Premam. Her next film was Kodi, her debut in Tamil cinema, in which she had the lead role opposite Dhanush. Currently, She is pretty much busy doing films in South Indian film industry.

The actress is also active in social media platforms by uploading pictures from her photo shoots. She enjoying nearly 1 crore followers for her official Instagram account after uploading 1131 posts. Check out some of the below :

On Tuesday, Anupama came up with a couple of photographs of herself wearing a white attire. “Yes ….You caught me lost in thoughts 💭” her caption for the post read.

Among the many who reacted to the post, actor Amitash who acted as “Amul Baby” in “Vela Illaa Pattatharai” dropped a comment asking her to pick her call up. “Cool. Pick your phone. Thanks” his comment read.

A number of followers trolled the actor for his comment in his replies. A follower asked him to send him her number whereas another one said that Anupama won’t pick his calls. Check out the screen shot of those comments :

On the work front, Anupama is going to be seen in “Rowdy Boys”, “Karthikeya 2”, “Helen”, “18 Pages” and “Thalli Pogathey”. Amitash who was last seen anthology film “Kutty Story” and “Vaanam Kottatum”, is expected to sign more films.

Previous articleFull List Of BIGG BOSS SEASON 5 Celebrity Contestants !! Check Out
Next articleBlue Satta Maaran Opened Up About The Struggles He Faced During The Censor Process !!