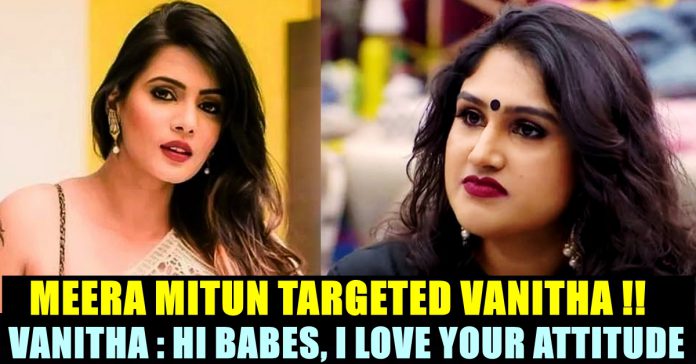 Meera Mitun, former contestant of Bigg Boss show targeted her co-contestant Vanitha Vijayakumar and posted a series of tweets against her foe one of her recent interview with an youtube channel. In the never ending saga of accusing top-tier celebrities with baseless allegations of Meera Mitin still continues despite of the several condemnations from the celebrities of cinema industry.

In one of her recent tweet, Meera Mitun confronted Vanitha Vijayakumar who recently caught in controversy by having an ugly conversation with Lakshmy Ramakrishnan. “I did see your recent interview, You urself a nepotism product,you can’t accept my war for the outsiders.U did mention I had paranoia in BB house,u were manipulated by all females n you raged against me, later only you came to know truth am good, that answers all” read her tweet.

“Why u people have a tough time accepting that am a celebrity with a huge market, ur interview was also about me,caption meera pulls the audience.
maybe it’s the ego ? No offence. Think about it. BB didn’t make me a celebrity, its an added feather to my cap” she added in her tweet.

Why u people have a tough time accepting that am a celebrity with a huge market, ur interview was also about me,caption meera pulls the audience. @vanithavijayku1 maybe it's the ego ? No offence. Think about it.
BB didn't make me a celebrity, its an added feather to my cap 😇

Known for her befitting replies to trolls and criticisms, Vanitha Vijayakumar immediately replied to her saying that she has every right to accuse someone professionally but she can’t make comments on people’s personal life. Vanitha said that she loves Meera Mitun’s confidence and her achievements. “just one thing let’s live our life without blaming others…you have a right to talk about anyone professionally..ut not personally..attacking a person’s family isn’t chivalrous” Vanitha said in her comment.

Vanitha also said that Meera Mitun could have been raised well by her father. She who asked her to ignore negativity, advised the former model not to pull anyone unnecessarily. Here’s her tweets :

Accepted…but not personally..attacking a person's family isn't chivalrous..you have spoken highly of ur dad..I'm sure he raised u well..nepotism and casting couch is personal experience everyone has a right to Express their experience ..its my opinion with my experience..

Ignore negativity..let's just spread love …I know what you are going through..very unfair..but one suggestion keep cool and don't pull anyone unnecessarily in your struggle..ur pain is urs..keep achieving and keep going..ur life live it..all the best

Earlier, After seeing the press note released by legendary filmmaker Bharathi Raja regarding Meera Mitun, actor Suriya reacted to the issue. “Like throwing mud on a beautiful painting, a woman named as Meera Mitun is letting her words out without control. I feel dutiful to condemn her act as a senior person in this film industry. She must stop abusing them to get into the limelight. Film Fraternity would raise voice against her. I severely condemn what she spoke all these days. Suriya is helping so many students for their education and Vijay is helping people without publicity. Defaming such personalities and their families is not acceptable at all.”Bharathiraja said in his press release. Check Suriya’s reply tweet :

Comment your views on these messages send by Vanitha Vijayakumar to Meera Mitun !!