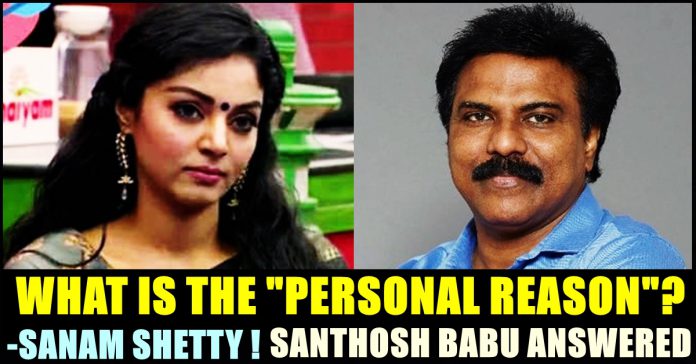 Santhosh Babu IAs who recently announced that he is removing himself from the “Makkal Needhi Maiam” party, replied to a series of tweets uploaded by Bigg Boss fame Sanam shetty who slammed the party members for leaving the Kamal led MNM after it faced a huge loss in the Tamil nadu assembly election. Sanam questioned about the loyalty of the party members and slammed them saying that they betrayed the people who voted for them in the election. Answering to her tweet, Santhosh Babu IAS said that the personal reasons should remain personal and said that Sanam will deeply regret if he answer her.

Dear friends, Good afternoon! It’s with a heavy heart that I am informing you that I am resigning my post and membership from Makkal Needhi Maiam. My decision is due to personal reasons. I thank Kamal Sir and our team for their affection and friendship.

Padmapriya who contested in Maduravoyal constituency and Dr. Santhosh Babu IAS, Velacherry candidate and General Secretary of Makkal Needhi Maiam announced about their resignation on the same day. Santhosh Babu cited “personal” reasons for his decision whereas Padma Priya said “few” reasons made her to take the decision. On 6th of May, Vice president Dr. Mahendran and few others announced about their exit from the party as well.

Reacting to the decisions made by the party administrators of MNM, Bigg Boss contestant Sanam shetty came up with a series of tweets criticizing them for their approach towards the loss of the party. She questioned whether they would do the same if they registered victory in their respective constituencies. “What is the ‘personal reason’ Mr. Santhosh Babu, Mrs. Padma Priya, Mr Mahendran & others? You campaigned to lakhs of people abt reasons to be in party. Now public wants to know why u quit Kamal Haasan sir u don’t need power to serve. Your vision is enough.” Sanam said in one of her tweets.

What is the 'personal reason'Mr @SanthoshBabuIAS Mrs @Tamizhachi_Offl Mr Mahendran & others?
U campaigned to lakhs of people abt reasons to be in party. Now public wants to know why u quit@ikamalhaasan sir u don't need power to serve.Ur vision is enough.#staystrongkamalsir

After three days, Santhosh Babu replied to the tweet of Sanam shetty writing “Dear Ms. Sanam shetty, Good morning! Let “personal reasons” remain personal, lest it open up a Pandora’s box…if I were to answer your question, you will deeply regret as to why you asked that question at all in the first place… “

Dear Ms.@SamSanamShetty1 , Good morning! Let “personal reasons” remain personal, lest it open up a Pandora’s box…if I were to answer your question, you will deeply regret as to why you asked that question at all in the first place…

Sanam shetty countered Santhosh’s reply by writing “Dear Mr @SanthoshBabuIAS do u warn everyone abt ‘regretting deeply’ who asked u this question or is it just me? I don’t regret asking sir. Ur response clarifies that ur reason was surely NOT personal. V the people r not scared of Pandora’s box. May be that’s a Politician’s fear!” to which the former politician said “Depends on which politician….”

Depends on which politician….

However, it didn’t end there as Sanam said “Ur comments just keep getting interesting sir. May be u want me to ask which politician !” in her next reply.

Ur comments just keep getting interesting sir. May be u want me to ask which politician !

The three year old Kamal Haasan led political party looked promising till the election campaign and was expected to get at least a vote percentage that exceeds double digit. However, the party managed to get only 2.52 % of vote share in the election which was won by DMK. Former Vice president Mahendran said that the attitude of Kamal Haasan towards the growth of the party has not been changed even after facing huge loss in the Tamil nadu assembly election. He cited the presence of “Sankhya solutions” in the party and said that Kamal Haasan is being misguided. Comment your views on this conversation between Sanam Shetty and Santhosh Babu IAS.

Previous articleNakkhul Replied To A Girl Who Spewed Hatred At Him Based On The Bigg Boss Jodigal Show !!
Next articleJayam Ravi’s Reply To A Reporter On How Much He Donated Wins Internet !! WATCH