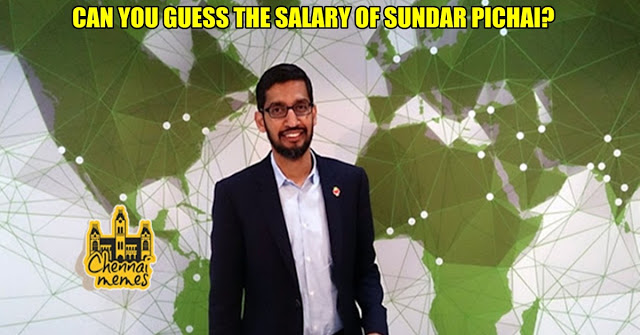 You Will Be Shocked On Knowing Sundar Pichai’s Salary In 2015, Here’s The Full Details

Google CEO Sundar Pichai made $100.5 million in 2015, according to a regulatory filing released on Tuesday.The filing revealed Pichai was paid a salary of $652,500, awarded restricted stock worth $99.8 million (which will vest fully in 2017), and given “other” compensation of $22,935.Last February, Google awarded Pichai $199 million in restricted stock, which was the biggest grant reported by a Google CEO, according to Bloomberg.Pichai became CEO of Google in August, 2015, after the reorganization of the company under the Alphabet umbrella. Prior to that, Pichai led Chrome and Android.

In 2004, Pichai joined Google as its VP of product management, where he led the team working on Google’s Chrome browser and operating system.In September 2008, Pichai oversaw the successful launch of the Chrome web browser, and less than a year later, the web-based Chrome operating system for netbooks and desktop computers.A year later, Pichai was put in charge of Android after Android co-founder and CEO Andy Rubin stepped down in March 2013.

Previous articleNagpur’s Effort to Beat the Heat at Traffic Signals is Pure Genius
Next articleRemember This Harry Potter Star? He Is Now A CAGE FIGHTER.. Here’s The Full Story!

A popular Tik tok star named fun bucket Bhargav got arrested by police under POCSO act for raping a minor girl in Vishakapatnam. The...

After getting evicted from the show, Suchithra is still stretching her supportive hand to Balaji Murugadoss, one of her co-contestant with whom she had...