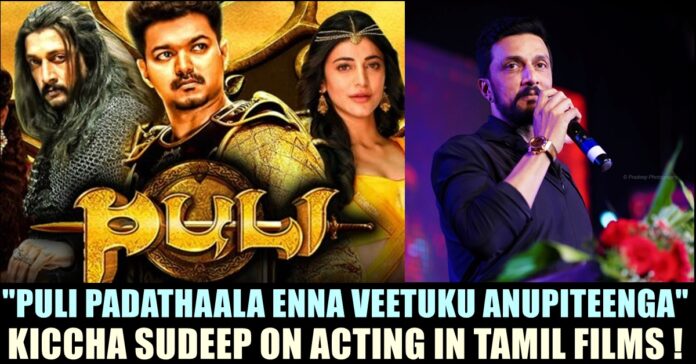 “You Sent Me Home After I Did Puli” – Kiccha Sudeep

Famous South Indian actor Kiccha Sudeep is currently busy p;romoting his upcoming film
“Vikrant Rona” which is scheduled to release on 28th of July in theatres. The actor has been visiting the cities across the country to promote the film and in a recent press interaction, Kiccha said that people of Tamilnadu sent him home after acting in “Puli”, a film of actor Vijay directed by Chimbu Devan. 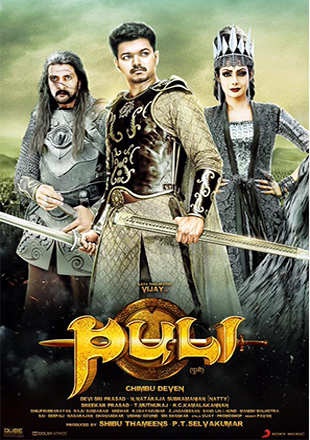 Kiccha predominantly appears in the films of Kannada language and also acts in the movies of Hindi, Telugu and Tamil. He is also the host of Bigg Boss show Kannada version since the year 2013. Sudeep gained widespread acclaim after working in S. S. Rajamouli’s Eega, a fantasy film in which he portrayed an industrialist who, on falling for an NGO worker (played by Samantha Ruth Prabhu), kills her alleged lover, who begins to haunt him in the form of a housefly. The film and Sudeep’s performance were highly acclaimed.

The actor made his proper debut in Tamil through “Puli” starring Thalapathy Vijay, Sruthi Haasan, Hansika Motwani, Nandita, Sridevi and others. Kiccha, in the film played the role of Jalatharangan. The story of the film which was released in the year 2015, revolves around the clash between humans and demons (Vedhalams) ruled by a demon kingdom in a fantasy world, where a human is fighting for justice for the killing of humans by demons, but his ancestry turns out to be a mystery.

The film received majority number of negative reviews from critics and didn’t impress the audience as well. Kiccha’s role as a villain didn’t make an impact for the film due to poor execution and writing and the actor didn’t act in any movie in Tamil after that. Now, in the promotion of his upcoming film, Kiccha had said that Tamil audience sent him home after acting in “Puli”.

“I don’t mind playing Grey roles. But there’s a problem in it. If I play a negative character as in “Eega”, there is no issue as I’m an out and out villain in that movie. After many years, after they consistently kept asking me, I accepted to act in “Puli”. I did “Puli”. But you people sent me home. You have to answer me now, why did you send me home ??” the actor asked the press reporters and added that he was just kidding.

Sudeep’s upcoming film Vikrant Rona will be directed by Anup Bhandari and will feature Nirup Bhandari and Neetha Ashok. He is also set to play an extended cameo as Bhargav Bakshi in the upcoming Pan India movie Kabzaa starring Upendra.

During a question and answer session in his youtube channel "Touring Talkies", director and actor Chithra Lakshmanan answer to a fan's question on whether...