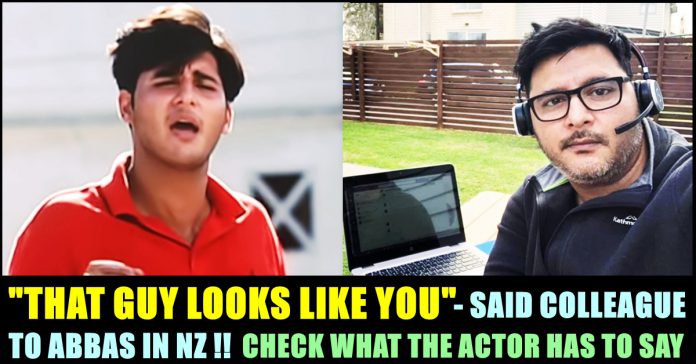 “You Resemble This Guy” – Abbas’s Colleague After Seeing Him In “Kadhal Desam” !! Check What He Has To Say

Actor Abbas who is currently residing in New Zealand after leaving cinema, on Saturday, came up with a post in his official Facebook account, revealing about his his friend reacted after seeing him in “Ennai Kaanavillaye Netrodu” song which took place in the 1996 film “Kadhal Desam”. The film of director Kadhir became the actor’s debut in film industry. Now, Abbas, through his post says that his colleague couldn’t identify him in the song and expressed his wish of getting back to that old look of himself. This adorable post from the actor garnered huge reception from his Facebook followers.

Abbas debuted in Tamil film industry through 1996 film “Kadhal Desam” which became a critical and commercial success. Impressed with his performance in the film, audience and media dubbed him as a “heart-throb” after which he started receiving several more offers.

After that phase, the actor started appearing as antagonist in films such as “Thiruttu Payale”, “Guru En Aalu” etc. He also acted in advertisements and one of the popular ads he featured in was “Harpic” bathroom cleaner. The advertisement became a subject of ridicule and actor stopped acting in Indians films. He is currently residing in Auckland, New zealand with his family.

Most recently, during his interaction with a private youtube channel, Abbas saidthat he could live with more freedom in a country like New zealand and pointed out that the freedom lacks in a country like India. He also revealed that he worked in several fields including as an employee in petrol bunk, motor cycle mechanic, in constructions field in New zealand.

Now, he came with a post in his official Facebook account sharing about how his colleague reacted after seeing a song from his debut film. The colleague said to Abbas that the guy who acted in “Enai Kaanavillaye” song looked similar to Abbas. Sharing the video he received, Abbas added a current selfie of him and wrote “Some laughter …..Working thru lockdown and a colleague sends me this says u resemble this guy”

The transparency provided by the Abbas about his personal life made his followers to feel him closer which was evident through the comments he received. Many wanted him to make his come back into Tamil cinema as well.

In a recent interaction with a youtube channel, the actor disclosed about why he left country India. The actor said that people in India are judgmental towards a cinema artist like him whereas people who belong to western countries gave him the freedom to do what he loves. Read : “This Is Why I Left India” – Actor Abbas Opened After Years !! WATCH

Actor Amala Paul, in a shocking statement, has revealed that she was thrown out of Vijay Sethupathi’s upcoming Tamil film, dubbed as VSP33, because...

A 2019 video of Bollywood actress Divyanka Tripathi dancing in front of Academy award winning musician A.R Rahman got resurfaced in Internet with online...

The Most Awaited “Beast” Review Of Blue Satta Maaran Is Out!! WATCH

"Beast" review of Blue satta Maaran who is known for ripping commercial movies apart is out now. For the film which was released on...