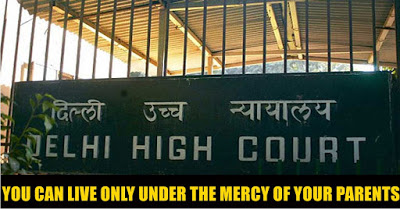 The Delhi HC has given a judgement stating that a son has no legal rights over his parent’s house.

However, the trial court had passed the decree in favour of the parents after which one of the sons, along with his wife, had moved the high court.


In the order, Justice Rani noted that the son and his wife were unable to prove that they were the co-owners of the property, while his parents have established their contention on the basis of documentary evidence..