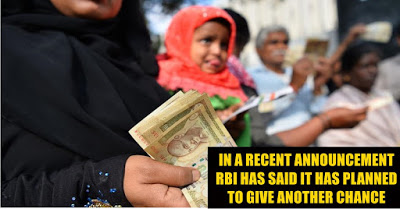 Right now, only NRI’s have been allowed to exchange their old notes and also only upto a certain sum. But a recent announcement made by the Reserve Bank Of India (RBI) stated that it’s planning to allow citizens to exchange a certain sum only on a limited time and frame basis.

The central bank have been receiving request from public stating that they have still few more notes that are to be exchanged. The bank has started to pay heed to the requests as thousads of them have been storming in every odd day.

“The amounts are as small as Rs 2,000… the issue is being looked into and the advice would be to hold on to those notes as we are examining (opening) another window for these genuine people,” the source said. People can deposit old notes but only at RBI offices. They have to give a valid reason for missing the December 30 deadline. The RBI deadline ends March 31.