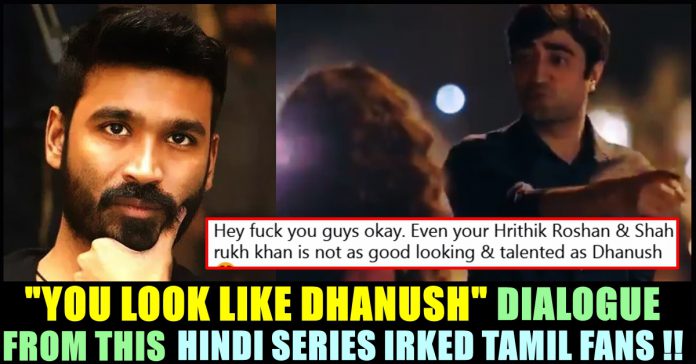 A particular clip from a Hindi series in which the actors could be seen mocking the looks of Tamil nadu born actor Dhanush-based on his debut Bollywood movie “Raanjhanaa”, got resurfaced in the micro blogging social media site. The video already went viral with fans of the national award winning actor flooding the feeds of social media platforms slamming the makers of the Hindi series. Now, a fan uploaded it again with an edit glorifying the looks of the actor to prove their belief wrong. The video is trending in online platform with various kind of reactions from fans.

Dhanush debuted to Tamil film industry through “Thulluvatho Ilamai” which was directed by his brother Selvaraghavan. The film was released in the year 2002 and he was criticized for his “lean” look at the time. He went on to act in some of the other films of his brother such as “Kaadhal Kondein”, “Pudhupettai”, “Mayakkam Enna” and nurtured himself as a performer. Today, Dhanush is one of the most wanted versatile actors of Kollywood film industry. National award winning filmmaker Vetri Maaran played a huge part in the growth of Dhanush, with whom the latter collaborated in four movies as an actor so far.

He who enjoys a huge fan base in Tamil nadu, went on to make his debut in Bollywood through “Raanjhanaa” and became a pan Indian actor by sharing screen space with Amitabh Bhachchan in “Shamitabh”. Dhanush who also worked in an International project, is going to be appeared in “Grey Man” with Hollywood actors Ryan Gosling and Chris Evans. “Avengers” fame Russo Brothers are directing the “Netflix” project.

The recent video clip which is going viral belongs to the Bollywood series named “Little Things. In the particular video that is doing rounds, we could see the actors using Dhanush’s name to criticize the looks of each other. “Have you ever seen your face ? Dhanush !” a person in the frame says to his friend to which the other two are responding with a laughter. Further he says “You are exactly like that ! You are like Dhanush and Sonam Kapoor. Except, he makes Dhanush look like a Super model”

The viral video shows the compilation of actor Dhanush’s scenes from his Tamil films, after the clipping of the Hindi series. Watch the video below :

“dhanush is our pride.. FYI he’s one of a handful of Indians who has been qualified to act in Hollywood.. U guys making fun of him here can’t even reach half of where he’s now!” a fan wrote after watching the video whereas another one said “Dhanush is not only a handsome, talented actor, he is a great dancer and singer as well. He is superior to y’all. His 5 min song ‘Rowdy baby’ is far better and more entertaining than whole ass bollywood films.”

Check out some of such tweets below :

#dhanush is our pride.. FYI he's one of a handful of Indians who has been qualified to act in Hollywood.. U guys making fun of him here can't even reach half of where he's now! https://t.co/skbo2b1gwF

Wtf is this assholery?
Dhanush is not only a handsome, talented actor, he is a great dancer and singer as well. He is superior to y'all.
His 5 min song 'Rowdy baby' is far better and more entertaining than whole ass bollywood films. https://t.co/zicMgRmc3v

You are blind if you think Dhanush is not handsome https://t.co/ElqLFlaDsB

This is the reason I fucking hate any product from Bollywood, full of racism and nepotism plus they always think they are superior plus their movie is mostly 0 content https://t.co/fYi3n9QtmB

Hey fuck you guys okay. Even your Hrithik Roshan & Shah rukh khan is not as good looking & talented as Dhanush 🥱 https://t.co/Wn1JOEQL87

Thing is not about Dhanush but about the beauty standards set for men as well, that u can't be dusky and lean for a bollywood hero. https://t.co/WmdEveb3Yp

That cringy forced laugh at 0.13 says much about the wannabeness this series carries! Get down those high horses guys you ain't any white man from Hollywood to talk shit about skintone, besides you live in a 'Brown' country so fxcking behave like one. Racism ain't Funny! https://t.co/xV1BnAqKvb

Dhanush should act more hindi films. Should give them a fitting reply in their own style. https://t.co/N0TJdPYa2l

He’s got more number of awards than the combined number of brain cells that these racist Fing idiots that made this video have🤡#SHAMELESS https://t.co/seeRlPWzZj

Mocking Dhanush?
Bro pata bhi hai wo kon hai?
Like more successful then you three- I blame the damn writer of this series or whatever this shit is-
They can't even match Dhanush in acting-
Seriously this racism needs to stop asap! https://t.co/nMRIOXbYIH

Wow, these hindi tv shows will continue with their northie agenda of making us South Indians look bad.

We have enough South Indian content to watch. That y'all later remake 🤡🤡🤡 https://t.co/mhp1TwuJWr pic.twitter.com/uGIvzAkOVU

Racism is ingrained in our society to an extent that it’s the normal.
Start by calling out your friends and family members. https://t.co/RXr6yzqZpA

First Post Of Mahat After Coming Out Of BIGG BOSS House !! He Is Very Emotional !!