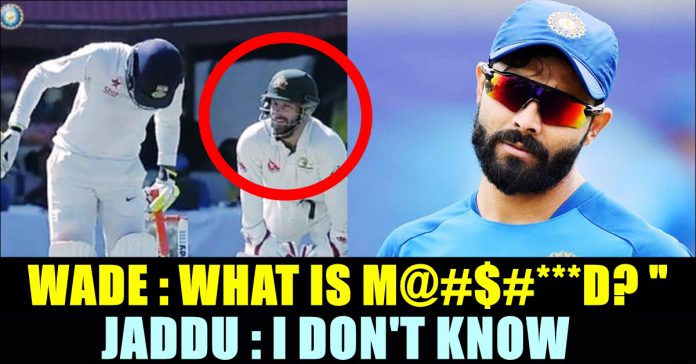 A three year old video of a hilarious conversation that took place between Indian all rounder Ravindra Jadeja and Australian Wicket Keeper Matthew Wade is doing round in social media platforms with fans reacting to it in various ways. The incident took place in Dharamsala ground during a test match that took place between Australia and India. During the third day of that test match, Jadeja and Wriddhiman Saha formed a match-winning partnership that helped India take a crucial first innings lead of 32 runs. Jadeja showed good defensive technique against the likes of Pat Cummins, Josh Hazlewood and Nathan Lyon, and this frustrated the Australians.

When Jadeja reached his half-century, he celebrated it in his trademark ‘Rajput Boy’ style by swinging his bat like a sword. But amidst all the action and drama, Australian wicketkeeper asked something to Ravindra Jadeja which was caught on stump mic and it made us laugh. In the brief conversation, we could see Wade asking Jadeja to tell what the term “Madharchod” means. It is a curse word that is widely used by the people who speaks Hindi language.

Recently, Team India registered a historic win in the Australian soil through their terrific performance in the second test that took place in the Melbourne Cricket Ground. After restricting Australia for just 195 runs in the first innings, Team India scored 326 runs in the second innings with the help of skipper Rahane’s outstanding century and Ravindra Jadeja’s half century. Again, the bowlers displayed some quality effort and made Australia to get all out for 200 runs. In the fourth Innings, India needed 70 runs to win and the team scored it effortlessly by losing just two wickets.

On field banter is common between the players of opposite teams. When it comes to India and Australia, players of both the teams would be pumped up to take the power over the match and would involve themselves in sledging the opponents to distract them. During 2019, Rishabh Pant gained a nickname “baby sitter” after involving in a banter with Tim Paine of Australia.

Now, in this old video, Mathew Wade could be seen asking Ravindra Jadeja to tell the meaning of “Madharchod” is doing rounds in the online platforms. “What is Madarchod ?” asks Wade to which Jadeja replies saying “I don’t know you should ask somebody”.

“Would you tell what it means ?? I don’t know why you called me Madarchod.” Wade continues. “Did I tell you ?” Jaddu questions to which Wade replies “Yeah, You called me Maadrachod, That is why I want to know what it is”

“I don’t know, I didn’t tell you anything” Ravi denies and continues to concentrate on batting. Watch the video below :

This could be initiated by Wade just to distract the concentration of Jadeja to get him out. However, this video tickled the laughing bones of the fans of Indian cricket team.

Bigg Boss housemates are currently performing the luxury budget task of the week, for which they are divided into two teams and are asked...

Why Nandan Isolated Himself Despite Of Having No Symptoms Of Corona ?? WATCH

Celebrities with highest fan following are carrying a biggest responsibility on their shoulders at this crucial situation. People are requested to stay in home...