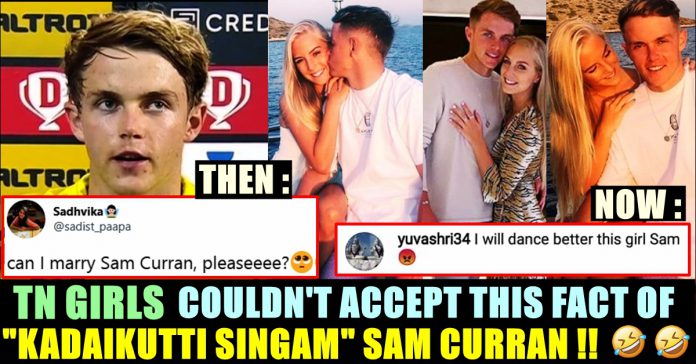 Sam Curran, the new national crush for the girls of the country, left them in a dejected state with the old pictures of himself with his girl friend, Isabella Symonds-Willmott. The 22 year old cricketer won the hearts of fans with his performance in the first match of Chennai Super Kings against Mumbai Indians, the arch rivals of the yellow team. He scored a quickfire 18 runs in just 6 deliveries which helped the team big time to chase the 163 that posted by Mumbai. He also took the key wicket of Quinton de Kock who was well set.

“Great to make my Chennai Super Kings debut and a great team performance to start off the tournament #WhistlePodu” he posted a tweet after the match.

Great to make my @ChennaiIPL debut and a great team performance to start off the tournament #WhistlePodu pic.twitter.com/Cw0kGHwrJu

Being an all rounder, Sam has already sealed a permanent place in Chennai Super Kings with his handy contribution in the first match it seems. However, the fan base he gained with his limited presence in the 40 over match is immense. Fondly called as “Kadai Kutty Singam”, Sam not only impressed cricket watching male followers but also the girls of the country, especially the girls who belongs to Chennai city. They declared him as their crush and a set of girls expressed their wish of getting married to him.

“In case someone hasn’t said this already. I LOVE YOU SAM CURRAN” a girl wrote whereas another one asked “I will shamelessly admit that YES, I too have a big fat crush on Sam Curran.”.

can I marry Sam Curran, pleaseeee?🥺🥺🥺

I will shamelessly admit that YES, I too have a big fat crush on Sam Curran. #CskForever

I'm starting to develop a crush on Sam Curran….😝

Sam Curran is simp worthy. Finally I have a crush after such a long time 😍

As soon as these reactions surfaced from girls, the Internet introduced Sam curran’s current girlfriend to them. Going by his Instagram account, the 22 year has been spending some good times with his girl Isabella.

Found myself a tiger in India 🇮🇳 🐅

Heart breaks when your rescent crush @CurranSM is commited already 🙁 🙁

the pain is real💔

Sam Curran's girlfriend is cute too, 🙂

Comment your views on these reactions of TN girls after knowing Sam’s current relationship status !!