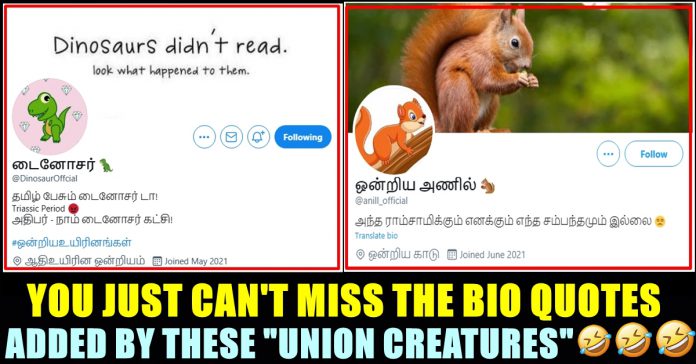 We all are aware of the atrocities being orchestrated by the group “Ondriya Uyirinangal” (Union Creatures) in Twitter. The accounts which are created by the Netizens in the name of animals are targeting people who believe in superstitions. In simple words, supporters and party members of BJP are being subjected to severe trolls by the “Union creatures”. The simple counters and replies that are made by these “Union Creatures” are garnering huge reception from the users of social media platforms. It also helps people from other social media platform to create memes and trolls. Now, the twitter bio of these creatures has grabbed special attention and you are going to see why.

Dinosaur, Union Rabbit, Union Turtle, Union Cat, Union Panda, Union Nalla Paambu, Uttar Pradesh Cow, King Kong, Avatar Kutty, Union Squirrel are some of the animals that are roaming in the streets of Twitter for the past few days which belongs humans. Dinosaur, in its bio, says “I am a Tamil speaking Dinosaur. Triassic Period. Chancellor- Naam Dinosaour party”

“NEET Exam is unnecessary and I came here to demolish it” reads the bio of Godzilla.

Here’s what Dinosaur Kutty has to say through his Bio :

Bat says that he entered the field to fight against Sanghis and informs that he is not from China.

The monkey of Alan from “Hangover” also has to say something through his Bio.

“Aamai Kunji” says that he is a Member of Junior Union Animals 2.0 and creates awareness on the similarity between “Sanghis” and “Thumbis”

Nalla Paambu says that he is a friend of Antique creatures and will bite Sanghis and “Thambis”.

Lizard says that he is a former chief minister among the creatures which are crawling under the chairs.

“I live to increase soil fertility and they destroyed me by using tractors.” says Soil Warm through his Bio.

Dinosaur Kunju says that he is from the same “Upper” caste and always has the memories of forests.

Singam using the reference of “Singam” Suriya to identify himself.

It all started when Mannargudi MLA Dr. T.R.B Rajaa and finance minister Dr. P.T Raajan reacted to a hilarious troll that was made as a reply to a tweet uploaded by the official twitter account of Indu Makkal Katchi. The tweet of IMK trolled the speakers of Tamil language who claim that the language is the most oldest one among all. “It seems that they would claim that even the Dinosaur spoke Tamil during its time” the tweet of Indu Makkal Katchi said and became a subject to massive troll and criticism.

To counter back the tweet of the party, a user of the micro blogging social media site created a separate parody account of a “Dinosaur” with a handle name “Dinosaur” and replied “Yes, I Talked in Tamil, you schmuck”. The account contained a display picture of a cartoon version of the reptile. “தமிழ்லதான்டா பேசுனேன் மயிரு” the reply tweet read.

The tweet garnered wide reach among the users of Twitter with many sharing the screen shots of it with hilarious captions. The tweet garnered the attention of Mannargudi MLA T.R.B Rajaa who helped it to reach larger audience. He shared the tweet in his timeline by adding laughing emojis and Tamil andu finance minister PTR “liked” it through his official account. After Sun news making a news report on it, the accounts of “Union creatures” started trending ever since.

Vishnu Vishal Worried For Not Being A Cricketer !! Ashwin Consoled

Actor Vishnu Vishal who impressed audience with his quite exciting filmography, has a separate fanbase for his cricketing skills. The way he performed in...