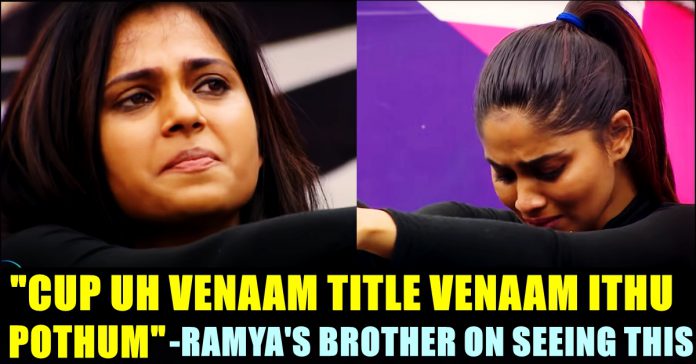 The final task of ticket to finale demanded the contestants to stand on the platforms and keep holding their respective ropes without taking their hands off. It was announced that the contestant who hold their rope for the longest duration, would become the winner of the task.

During the task, when Ramya and Shivani were holding their ropes, A.R Rahman’s “Singapenne” song from “Bigil” was played and the contestants got excited. They encouraged the duo and the moment impressed the viewers as well. Ramya’s brother Parasu Pandiyan, Rio’s wife Shruthi and former Bigg Boss contestent Sherin expressed their emotions through their respective social media accounts after seeing the dramatic moment.

Minutes after the task commenced, Balaji took his hands off and continued holding the rope. Rio, Gabriella failed to hold the rope and accepted their mistake to Bigg Boss Boss. When Balaji claimed that Aari moved his legs, Aari pointed out how Balaji is playing foul game during the finale task. Both of them left their rope during the argument. After leaving the rope, they continued to argue with each other.

Later Rio, followed by Som and Gabriella quit the task for making mistakes. Ramya and Shivani were holding the ropes successfully without any fail and were fighting to win the 9th task of Ticket to finale. They were holding the their respective ropes for 2 hours during the end of the episode. Now, it has been reported that Shivani won the task by holding it for 4 hours and 48 minutes and finished the task by 39 points.

While Ramya and Shivani were holding their ropes, Bigg Boss played the “Singappenne” song from “Bigil” film which was specially dedicated to women in our society. On hearing the song, Ramya and Shivani became emotional and the other contestants started singing the song together to encourage the duo. Also Read : JUST IN : BIGG BOSS Eviction Result Leaked !!

On seeing this episode, Ramya Pandiyan’s brother Parasu Pandiyan came up with an Instagram post saying that the moment itself a victory for his sister. After terming it as “Goosebumps moment”, Parasu said that his sister doesn’t need a cup or title. “Cup uh venam title venam ithu pothum” he said in his story and added a message to his haters.

Actress and former Bigg Boss contestant Sherin uploaded a story saying that it is one of the best moments of this season.

Rio’s wife Shruthi wrote “You go girls ! Give them tough ! You and your family are facing all the trolls with so much strength ! Loved the episode ! To Every girls out there, Stay Strong” in her Instragram story.

Check out the screen shot of her story here :

Comment your views on these reactions for the Friday’s episode !!

Previous articleMaddy’s Reply To A Baseless Accusation Of A Doctor Goes Viral !!
Next article“Concentrate On Your Batting” Fan After Seeing Warner’s Recent Post !! Check His Reply

Jason Samuel who accused Gopi and Sudhakar of cheating money through a crowd funding app named "Fundmelon" by uploading a 2 hour 30 minutes...

Ravichandran Ashwin who achieved the milestone of picking 400 wickets in test cricket in the third test against England, came up with a series...

24 Year Old Youth Arrested For Flashing His Private Part In Front Of A Girl !!

A 24 year old man from Gujarat's Ahmedabad arrested for flashing his private part in front of a 21 year old law college student....