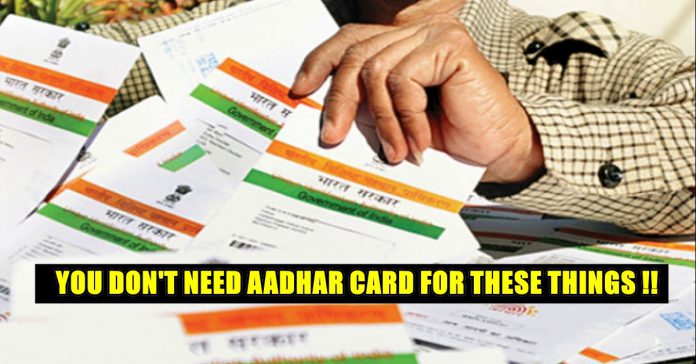 You Don’t Need Aadhar Card To Access These Things In India : Everything You Need To Know About It !!

If we had a rupee for every time we had an Aadhaar linking confusion, we’d have enough moolah in the bank to quit our jobs and head permanently to Bali. Keeping all this mind, we catalogue a few things that Aadhaar is not necessary for:

If we had a rupee for every time we had an Aadhaar linking confusion, we’d have enough moolah in the bank to quit our jobs and head permanently to Bali. There was a massive issue with people thoroughly confused regarding whether the 12-digit unique identity number was necessary for the procurement of a mobile SIM. Moreover, the availability of massive amounts of contradicting information on the internet didn’t help the cause of clarity either. Customers were regularly harassed with message updates by telecom companies to the point that the Supreme Court had to issue an order stating that the companies amend their message to show deadline for linking. The latest move by Employees Provident Fund Organisation (EPFO) to suspend the linking of Aadhaar in what is reported to be a data leak scare also adds to the common citizen’s anxiety. Keeping all this mind, we catalogue a few things that Aadhaar is not necessary for:

“The ministry has issued instructions to all telecom companies, asking them not to deny a SIM card to any individual who does not have an Aadhaar number. We have asked them to accept other forms of KYC (know your customer) documents, and continue to issue SIM cards,” telecom secretary Aruna Sundarajan told TOI. In the meantime, companies have been directed to accept other documents like passport, Voter ID or driving license for verification of identity. A March 8 report in Live Mint states that for now, citizens are not required to submit their Aadhaar details for any national entrance examination. The interim order had been passed by a bench headed by CJI Dipak Misra in a case regarding mandatory Aadhaar for NEET 2018. This comes as a breather for millions of students all over the country who would otherwise have to spend their precious preparation time for procuring an Aadhaar card.

“The schemes under EPFO and ESIC have been excluded from the list schemes identified for implementation of Direct Benefit Transfer,” a labour ministry letter to EPFO’s Central Provident Fund Commissioner had stated, according to Firstpost. This essentially means that the members don’t have to submit their Aadhaar numbers to avail the PF benefits. At a time when there are reports of a data leak in this vital cog of the working classes, the move is surely appreciated.

Not compulsory for existing policies

While Aadhaar is still mandatory for new bank accounts, a report by Live Mint reproduced on the ICICI Lombard official website states that IRDAI (Insurance Regulatory and Development Authority of India) has said that Aadhaar is not compulsory if you’re looking to buy an insurance policy.

However, Live Mint also reports that customers buying new insurance plans will need to submit their Aadhaar number within 6 months of the date of the policy. If they fail to comply, they will need to submit “officially valid documents” which are mentioned in the Prevention of Money-Laundering (Maintenance of Records) Rules, 2005. The Aadhaar conundrum has caused a massive upheaval in people’s lives with leaks being reported of almost every month. The SC had even asked the government how a homeless person would apply for Aadhaar considering they do not have an address proof and other required documents. In fact, reports had emerged last year about people starving to death because of Aadhaar linking failures which had caused obstacles in ration distribution.

Previous articleWoman Slashed Man’s Penis Who Tried To Rape Her : SHOCKER From Uttar Pradesh !!
Next articleSHOCKING : Fans Cut Their Hands In The Name Of Celebrating Their Hero !! : Dreadful Incident Captured!!

The makers of “Comali” movie managed to grab the headlines in Tamilnadu amidst the waves that are being created by the Bigg Boss show...

It is shattering to realize that many of us who are eating in restaurants often are not aware of this fact about Service charges....