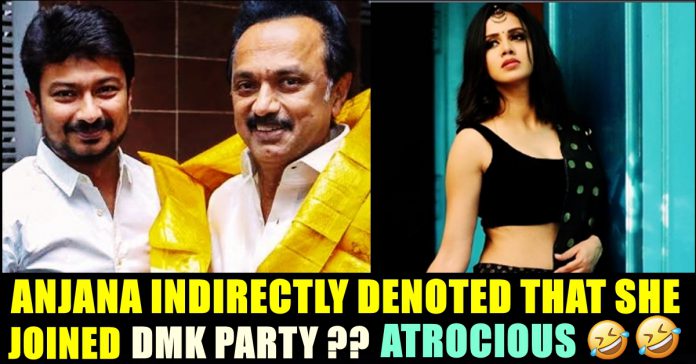 Celebrities posting their selfie pictures is something which is common in this digital era. It doesn’t need to be about something as they have every right to upload their picture anytime in their social media accounts. Now for posting a selfie picture of herself in her official twitter account, popular host and social media celebrity Anjana Rangan almost became an unofficial member of a political party.

Anjana Rangan became very much interactive with her fans followers in recent times. The 30 year old host who enjoys quite a huge fan following in social media due to her unique way of presenting shows, did programs for Sun Music for nearly 10 years.

For posting a selfie of herself with a caption “No filter! Just sun kissed! 😘”, one of her 18 lakh twitter followers asked her whether she belongs to DMK. It is very well known that the party’s symbol is raising sun for 60 plus years. Check out her post here :

The comment of the follower read “Neenga DMK Vaa?? 😀😀” which received 91 likes so far.

Anjana, in a way of denying that she doesn’t belong to DMK, expressed what she felt through her reply.

Check out some of the reactions for her reply below :

Recently Anjana grabbed the 15th spot in the “Most Desirable Women in TV” list released by Chennai Times. Wishes from her friends and followers are pouring for the proud mother. VJ Anjana Rangan gave birth to a baby few months back. Actor Chandramouli and Anjana became proud parents to a baby boy which made the anchor to take a break from her professional career. The couple named their son as Rudraksh.

What do you think on the user’s comment and Anjana’s reply to it !!

Previous articleTharshan’s Clarification For Sanam Shetty’s Accusation !! WATCH
Next articleAngry Cheran Gave His Award Back For This Reason !!

Tamilnadu Theatres To Face Shut Down Because Of This !!

Producer S.R Prabhu, chief of Dream Warrior Pictures released his movie Kaidhi in online platform before the end of its theatrical run. In a...